In the end of July media sources reported that US Lockheed Martin held talks with the Command of the Indian Air Force and allegedly agreed to discuss the deliveries of the American 5th generational combat aircraft JSF (F-35). Now the naïve journalists and "independent" observers interpret possible consequences without knowing that these interpretations are far more important for the US than the consequences. The above talks and respective media campaign are nothing but a far sighted PR aimed at assisting the main goal – selling F-16I fighters in the expected Indian tender. Claimed sale of the 5th generation technologies is a downright lie. 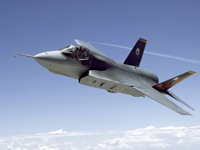 In the past decade US has perfectly mastered a primitive, but very efficient method of psychological warfare. First US makes an absurd statement it needs to achieve a goal. For example, Iraq (or anybody else) has nuclear weapons, US needs strategic defense in Europe against Iran and North Korea, the terrorists (if they blow up aircraft not above the US) are fighters the for democracy and human rights watchers. Between two sane persons such a conversation is hardly possible at all, but on the political level it forces another party to react to such ridiculous statements, thus creating a context extremely advantageous to the party-initiator.

It seems that such methods might work well in the commercial sphere too. First the US claims it is ready to discuss selling the 5th generation aircraft and technologies. Who can recall a precedent when the US sold its latest technologies to anybody? Leaving alone the third countries’ tenders (like in the Turkish helicopter one) in the past several years there have been noteworthy conflicts between the US and its allies (UK, Japan, Australia, European nations), when the latter accused the US of not willing to share the 5th generation aircraft technologies. Neither achieved anything. US does not share its latest technologies even with its military allies and the countries-partners of the JSF program.

Putting F-35 and the Indian light multi role fighter in one context is nothing but a clever marketing, or deceiving the customer, to put in more straightforwardly.

Technically F-35 can hardly be regarded as a match of F-16I or Russian Mig-35, the expected participants of the tender. It is an aircraft more often compared with the heavier versions – PAK FA (Russian 5th generation aircraft) or Su-30MKI (generation 4++). Noteworthy, India already participates in the PAK FA program on equal terms with Russia and already operates Su-30s, which did an outstanding record during the mock fights with the American and European matches.

Last time Su-30MKI engaged UK Royal Air Force Eurofighter "Typhoon" fighter in a mock aerial combat for the first time as part of the Anglo-Indian Exercise "Indradhanush 2007". Six Indian fighters as well as several European "Tornados" participated in the tests. The operational aspects of the exercises involved one-versus-one air combat as well as mixed-mission, multiple-aircraft sorties. The organizers of the meeting did not announce the results of the mock fights. Indians pilots were awarded the prize "Spirit of the Meet" for having demonstrated impressive flight abilities of the aircraft. It turns out that giving honourable prizes is less image-ruining for the western aircraft makers than keeping the records of the mock fights.

So far, all test fights have been unreservedly in favour of Russia/Indian pilots operating Russian or Russian-Indian made aircraft. It was recorded during several Indian-American air force joint combat exercises in Gwalior.

Indian media sources quoted Makhmud Makmakhon, Deputy Chief of India Air Force Staff, who said that the Americans expected from Indian pilots the actions in terms of the western doctrine of fighting aircraft application, but they chose the Soviet model, and as a result gained the upper hand over the opponents. Finally, the absolute superiority remained on the side of the fighters of Sukhoi Company. They won each two from three battles, in which they took part. During the dogfight the less manoeuvrable US F-15C had a few chances to survive. Thus, under the Indian command reports, Americans were shot down not less than 20 times.

The victories of the Russian fighters over the US matches have been recorded since August 1992 when the delegation of the Russian Air Force including pilots Alexander Kharchevsky and Georgy Karabasov first time ever came to the Lengly American Air Base with a friendly visit. Two two-seat Su-27UB aircraft and Il-76 military cargo aircraft were included into structure of the command as technical support. During the visit Russians offered training air fight. The Americans politely refused to hold it exposed to the public attention, claiming that their air base was located in the area of intensive air traffic and high density of the population, in spite of the fact that the air base, certainly, had had its own air zone closed for flights or temporarily closed for flights of civil airline planes. Finally, the Americans organised so-called joint manoeuvring in the Atlantic Ocean.

US Air Force was represented by the 1st Wing of tactical fighters, considered as the best aviation unit, with the top flight qualification pilots and the most advanced fighters. The mock fights included two-place Su-27UB (the Russian pilot in the front cockpit, the American, commander of this air base in the rear one), F-15D (American pilot in the front cockpit and the Russian air attaché), and also two-seat F-15D as an escort and observation plane, in the rear cockpit of which was the photographer with camera were directed to the flight zone. The conditions were typical for a dog fight.

First F-15D was attacked by Su-27UB. For the American fighter it turned out a problem to shake off the Russian attacker from his tail. Sukhoi kept the opponent in a sight without special efforts. With the roles changed Su-27UB by a fast climbing turn on a complete after-burning got away from the F-15D and after a while came into the tail of the US fighter capturing the target. After that the Russian pilot met with the two-place F-15D, which completely lost the sight of Su-27UB and was forced to request the escort aircraft the site of the opponent. At this time Russian fighter appeared from behind the tail of F-15Dl and, remaining undetected, followed it, which was reported from the escort plane. The American repeatedly tried to get off, but all its attempts appeared in vain. The pilots rotation from both sides in the fighting planes did not change the results.

Interesting quotation was given by the USA Today: We may not be as far ahead of the rest of the world as we thought we were, said Gen. Hal Hornburg, the chief of the Air Combat Command, which oversees U.S. fighter and bomber wings... The F-15Cs are the Air Force's primary air superiority aircraft and the results of the exercise were a wake up call.

Appearance of the F-22 and F-35 programs is explained to a great degree by the results of the previous comparisons between the US and Russian fighters. However, they won’t remain unanswered. Russia also has two 5th generation projects developed by Sukhoi and RSK MiG. India already participates in one (PAK FA). Mig-35, a prototype of the lighter 5th generation fighter, will meet its first rivals in the Indian tender.