Ecuador has refused to extend the Pentagon's lease on the Manta air base. 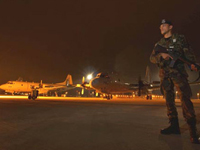 The Pentagon is desperately trying to convince leftist Ecuadorian President Rafael Correa that the Manta air base used by the US military for counternarcotics operations. But if negotiations fail as Quito anticipated, two other South American nations have offered their territory to open similar bases.

On Tuesday it became known that Peru has offered the United States the use of its air fields, according to U.S. officials. With Colombia's earlier offer to discuss air sites, the U.S. military now has two potential alternatives to Ecuador's Manta base.

Negotiations are in early stages, according to the U.S. officials, who stressed that Ecuador was not off the table despite President Rafael Correa's publicly stated opposition. Colombia and Peru have offered but I don't think Ecuador's really closed," said one official, speaking on condition of anonymity, as quoted by the Reuters news agency.

Ecuador’s Manta air base is the largest of the kind in South America and it is a key facility in US anti-drugs policy. By the way, counternarcotics operations have become one of the U.S. military's primary missions in Latin America, as Colombia and Peru, the world's top cocaine producers, receive the largest amount of U.S. military aid in the region.

The Peruvian and the Colombian offers come as both countries negotiate free trade deals with Washington, which are being challenged by the Democratic majority in the Capitol. An agreement with Peru could also involve U.S. financial assistance for de-mining efforts and other help with border security programs -- both needs voiced by Lima to Washington.