Chavez: “I have an obligation to fight a war against US imperialism”

In a new episode of the verbal cold war between Washington and Caracas, Venezuelan President Hugo Chavez said his country was ready to resist any US aggression and said that the battle “had already begun in the political and the ideological arenas”. Chavez also accused the US of meddling in the modernization of the Venezuelan armed forces as warned that he, as the leader of a self-denominated peaceful democratic revolution, “has an obligation to fight a war against US imperialism." 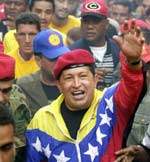 Chavez made the statements upon inauguration of the new military academic year for military chiefs. There, Chavez stated that the United States has prevented Brazil from selling Supertucanos warplanes amidst "plans to stop modernization of the (Venezuelan) Armed Forces." According to Chavez, Washington is blocking the selling of US military techonology from Brazil to modernize Venezuelan F-16s warplane fleet.

“This is the same thing that happened when they (Washington) tried to stop Spain from building ships, patrol boats and cargo planes for us. Now they are doing the same thing regarding (warplanes) F-16. They have refused to provide major maintenance; they are delaying shipments of spare parts. Let us not worry. I have sent a special taskforce to Moscow. If we have to substitute the fleet of F-16s with modern MiG planes, we will do it,” the President said.

Chavez also reminded that He reminded that Venezuela has already purchased Russian choppers and rifles, adding that such equipment is to arrive soon in the country.

Meanwhile, Washington warned that the modernization of the Venezuelan military could lead to a conflict with its neighbours. Chavez quickly ruled out any eventuality and went on with his policy to have a presence in regional affaris.

In this sense, he suggested to wonder why Evo Morales – a socialist farmer leader with close ties with Cuban leader Fidel Castro - was elected as the president of Bolivia and why presidential candidate Ollanta Humala – a nationalistic leader who likes to compare himself with Chavez - is leading polls in Peru.

Humala visited Chavez early this year, what led to an angry protest of the Peruvian President Alejandro Toledo, who said that Chavez “was not the President of Latin America.” "He (Humala) asked for an interview with me, and I accepted to see him. Peruvian President (Alejandro Toledo) went mad on this. What can I do? I have an interest in meeting him and hearing him (Humala.) We talked for six hours. He talked to me about the indigenous people in Peru; they have been forgotten and abandoned," explained Chavez.