Despite the objections by the United States and European Union, Iran announced that it would resume its nuclear development program on Monday. Iran and Russia has just held talks in Tehran regarding cooperation in nuclear power engineering. The two sides specifically discussed issues relating to a Russia-based joint venture to enrich uranium for the power plant in Bushehr. The timing of the Iranian statement smacks of scandal in the circumstances. 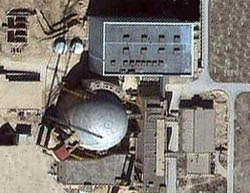 Experts are still in disagreement over Iran's real capability to enrich uranium.

Iran is a signatory of the Treaty for Nonproliferation of Nuclear Arms. Neither the treaty nor the Charter of the International Atomic Energy Agency prohibits Iran from conducting an uranium enrichment program. Iran has vast reserves of uranium located in Sagand, in the central part of the country. Nuclear power engineering needs only 4 percent enriched uranium while military nuclear facilities need 90 percent enriched uranium. Speaking to Izvestia, Academician Alexander Rumyantsev said that the complexity of uranium enrichment processes is nonlinear, the first steps are the most difficult ones. Does Iran know the secret of uranium enrichment? A source in the Russian intelligence service told Izvestia that on its nuclear facility in Isfahan Iran had only learned how to carry out most simple preparation procedures, the so-called uranium conversion. Academician Rumyantsev shares a similar assessment of Iran's enrichment capability.

Meanwhile, nuclear materials and equipment are traded illegally around the world on the black market. A.Q. Khan, the scientist behind Pakistan’s atomic bomb program, admitted selling secret nuclear technologies to Libya, Iran, and North Korea. Iran repeatedly claimed that the enrichment equipment had been purchased strictly for its nonmilitary nuclear program. Five hundred centrifuges were manufactured by Urenco, a British-Dutch company. IAEA's experts found out that the equipment was still dismantled. Iranian specialists do not know how to use it. Besides, 500 centrifuges are just a drop in the ocean – several hundred thousand centrifuges would be required to enrich uranium domestically. Iran has no weapons' grade uranium yet. The country has 40 tons of undressed uranium.

Why on earth does Iran need an ostensibly nonmilitary nuclear program? The country has the world's second biggest reserves of natural gas. Iran also has the third largest oil reserves in the world. As regards national security, it is obvious that Iran does not want to depend only on hydrocarbons in terms of energy sources. The capacity of a nuclear power plant being built by Russians in Bushehr is 1 gigawatt. There are plans to increase total capacity of Iran's nuclear facilities up to 6 gigawatt. Aside from the power plant still under construction, a nuclear conversion plant and uranium mines, Iran has two nuclear facilities.

The first one is a research nuclear reactor in Tehran, which was built by U.S. personnel in 1967 when Iran was under the shah Riza Pahlavi. The reactor was modernized by Argentine specialists in 1992 to lower the grade of enrichment from 93 percent to 20 percent. The reactor's capacity is 5 megawatt which is much more than that of the Soviet-built reactor destroyed in Iraq by U.S. army during the Desert Storm in 1991. Iran's other nuclear reactor is a small thing built by the Chinese.