These days Russia and Ukraine do not seem to be any closer to reaching an agreement in the talks on the natural gas prices than they were a month ago. Today the Ukrainian side insists on a new way of offsetting its services for the transit of Russia's gas supplies to Europe.

According to new rules recently devised by Ukrainian Prime Minister Yuri Yekhanurov, Ukraine will appropriate 15% of gas that passes through Ukraine. 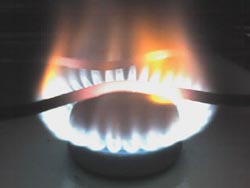 The logic looks as simple as a round of gopak. “If a 1,000 cubic meters of gas passes through the Ukrainian borders, 150 cubic meters of that quantity should belong to us as a transit charge. This is a contract, this is our absolute right, Ukraine's legal right to take for its own purposes 15% of gas as a payment for transit services rendered by thousands people doing the job from border to border in today's Ukraine,” said Mr. Yekhanurov, in an interview to a Ukrainian TV station. Gazprom is annually shipping 120 million cubic meters of gas through Ukraine to European customers. Fifteen percent of the above quantity will amount to 18 million cubic meters per year.

Ukraine's prime minister did not specify what formulas he had used for working out the new method. Analysts say the formulation of the problem is unnatural. According to Valery Nesterov, analyst with Troyka Dialog, there is no logic in Yekhanorov's statement. “What 15% is he talking about? The Europeans must receive gas shipments in full as by contract. Gazprom will be to blame should the Europeans receive an amount of gas that is 1% less than agreed. The situation will result in big scandals and bad consequences for Ukraine too,” said the analyst.

“We raise the prices for gas and they raise the transit charges – it was the only way to resolve the gas dispute,” said Mr.Nesterov in an interview to Pravda.Ru. The question is whether Ukraine  will make up in full or in part for the gas price increases. According to the analyst, Ukraine has no right to go for a full compensation. Mr. Nesterov estimates that Ukraine will have to raise the transit charges up to $5 per 1,000 cubic meters (a nearly five-time increase on the current charges).

Next year, Russia will increase prices for its natural gas supplied to former Soviet states. Georgia and Armenia will pay about $110 per 1,000 cubic meters. Russia's original offer to Ukraine was $150 in lieu of $50. In the meantime, Gazprom agreed to pay more for transit services e.g. $1.75 in lieu of 1.09.

Gazprom's resolve to triple the gas prices largely stems from the statements of the Ukrainian government, which declared its readiness to pay for gas on a market-price basis almost a year ago. Now Ukraine's rhetoric has changed. As it turned out, the national steel and chemicals sectors, the main exporters accounting for 30% of budget revenue, will run the risk of finding themselves outside the profit margins if the gas prices range from $90 to $110 per 1,000 cubic meters.

The wheel of anti-Russian propaganda started to spin again shortly after the findings were made public. Ukraine did not start negotiations on market relations. Instead, it made claims on a wide range of issues ranging up to the situation over the Russian naval base on the Black Sea coast.

No wonder the last offer to Ukraine was based on the same price formula as that usedfor European customers, $230per 1,000 cubic meters. The Russian gas supplies to Ukraine will be cut off at 10:00 a.m. on January 1, should the sides fail to close a deal for 2006.

Sources in Gazprom are skeptical about the statement by Alexei Ivchenko, CEO of NAK Naftagaz Ukrainy. Mr. Ivchencko recently said that “it would be impossible, both technically and legally, to completely cut off the gas supplies to Ukraine.” Gazprom staged a cutoff drill as if in response to Mr. Ivchenko's statement. Ukraine will have to do without the Russian natural gas unless it opts for the so-called “technical appropriation” of Gazprom’s gas exports to Europe. In other words, Ukraine might simply steal gas from European customers. In this case Russia will refer the case to the Stockholm Court.

Cutting off the gas supplies will bring about most catastrophic consequences to Ukraine. The country relies on Russia for about 80% of its gas requirements. The widely publicized purchase of natural gas from Turkmenistan is not worth a plugged nickel, Ukrainian officials admit it themselves. Ukrainian Energy and Fuel Minister confirmed that Ukraine would not be able to make up for a potential shortage of natural gas by supplies from Turkmenistan.

Supposedly, business will be as usual, according to Troyka Dialog analyst. “The gas supplies will be on, the talks will continue,” said he to Pravda.Ru. Mr. Nesterov added that the new tariffs situation might linger till the end of a March parliamentary election in Ukraine.

However, Mr. Nesterov would not be surprised if things happened in a different way. He points to several cases of natural gas cutoffs. In the past Russia kept its gas valves shut for almost a day for Belarus. Turkmenistan cut gas supplies to Russia for a few days late December last year. The gas supplies to Belarus resumed after signing a new agreement on a slight increase of the price. The analyst stresses the importance of Russian natural gas supplies to Ukraine's economy.

A recent public opinion poll shows that the majority of Russians – 80% of the polled – are in favor of the latest increase in gas prices for Ukraine. 11% of the respondents are against the increase. The poll was conducted this Tuesday by All-Russian Center for Public Opinion Studies. The supporters of the gas price rises mostly reside in Moscow and Saint Petersburg, according to the poll. An increase in the world natural gas prices is cited by 49% of the supporters as the main reason behind the price increase for Ukraine. From 22% to 25% of the polled cite different reasons including Ukraine's independence, and Ukraine's unfriendly foreign policy towards Russia; revenue from export sales of gas is badly needed by Russia for resolving social problems.

Those who oppose the move cite a variety of reasons. Sympathy for the common people in Ukraine have 44% of the objectors; 30% show feelings of neighborliness towards that country; 17% fear the worsening of Russia-Ukraine relations; 6% believe that Russia's imperial ambitions and its intentions to put pressure on Ukraine are behind the gas price increase; 2% believe that increasing gas prices will strengthen the positions of the United States and other Western countries in Ukraine.

The opinion poll involved 1,600 people residing in 153 villages, towns and cities of 46 regions and republics of the Russian Federation.