The Cuban President Fidel Castro said that any US invasion to his country would fail and called US Secretary of State Condoleezza Rice “mad” after Washington announced plans for a “democratic transition” in the Caribbean Island last week. Castro talked before the Nationl Assembly shortly after his government announced that it had turned a corner in its econmical recovery from severe financial crisis, reportin 11.8 percent growth in 2005. 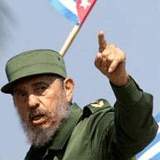 “I am going to tell you what I think about this famous commission, for the democratic transition in Cuba: they are a group of shit-eaters who do not deserve the world's respect,” Castro told the National Assembly. “In this context, it does not matter if it was the mad woman who talks of transition — it is a circus, they are completely depraved, they should be pitied,” added the 79-year-old Cuban leader.

While US imperialism was in its decline, Castro said, his revolution is “uncontainable and unstoppable. “We are in transition: to socialism, to communism,” Castro insisted.

Castro has been recently strenghtened by a number of victories of left wing parties in recent South American elections. The leaders of these parties: Tabare Vazquez, in Uruguay; Lula da Silva, in Brazil; Nestor Kirchner, in Argentina; Hugo Chavez, in Venezuela; and lately Evo Morales, in Bolivia, support his rule in Cuba and are critics of the US policies toward the region.

Addressing the communist nation's lawmakers as President Fidel Castro looked on, Economics Minister Jose Luis Rodriguez said the Caribbean nation had fully recovered from the 1990s, when austerity measures were adopted to survive the economic crisis caused by the Soviet Union's collapse.

"This could be considered the highest in revolutionary history," Rodriguez said of the growth figure, referring to the 47-year-long administration of Castro, who came to power with the Jan. 1, 1959, triumph of the Cuban revolution.

The economics minister also projected economic growth of 10 percent for 2006. Rodriguez said the biggest income earners for Cuba this year were tourism, nickel and the exportation of services - especially doctors and other medical workers hired by other countries such as Venezuela to provide free care to poor people.