On Monday Asia marked the tsunami anniversary. Ceremonies, in which relatives of tsunami victims took part, were held in all the countries that suffered from the disaster

On 26 December of 2004, exactly a year ago, Southeast Asia witnessed the most powerful earthquake in the last 40 years. 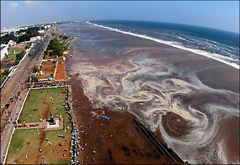 Its epicenter was located near the shores of the Indonesian island Sumatra. As a result huge seismic wave appeared wiping off everything on its way. India, Sri-Lanka, Indonesia, Thailand were among those countries that were hard hit by tsunami. To this day the number of victims was estimated at more than 230 people. Millions of people were left without home and bread. The economy of these countries was damaged by as much as $10,7 million.

Meantime international catholic charity organization Caritas made an official declaration that was published in Italy on Monday informing that the number of victims is actually twice more than the official data says and reaches as many as 400 thousand people.

Caritas experts made this conclusion on the ground of the data obtained by the branches of this organization in countries that fell victims to tsunami. According to Caritas the unofficial data in many regions differ a lot from those provided in the government reports. For example, the official data for Banda Aceh in Indonesia give a figure of 1,5 thousand victims whereas Caritas estimates their number at 25 thousand people.

The president of Caritas Internationalis Denis Vienot says that providing humanitarian aid for victims of tsunami is greatly impeded by corruption. Officials are trying to take advantage of the humanitarian aid. Vienot stressed that one had to be careful not to foster this vicious circle.

Caritas organization gathered $450 million from all over the world in order to help countries that were hit by tsunami. 24,5 million euro out of the whole sum were received from Italy.

On Monday Asia marked the tsunami anniversary. Ceremonies, in which relatives of tsunami victims took part, were held in all the countries that were suffered from the natural disaster, RIA Novosti reports.

In Indonesia at 8.16am local time a moment of silence was announced. The president Susilo Bambang Yudhoyuno took part in the ceremonies symbolically bringing into action an alarm that warns about the approaching tsunami.

In Padang, Sumatra Island, local citizens took part in the training course where they learnt what to do in case of another threat of tsunami. The location of this city is especially dangerous as there is a high risk of earthquakes here.

In Colombo, Sri-Lanka's capital city, meat markets were closed on Monday. At 9.30am sharp local time, exactly at the same moment when last year a giant wave hit the eastern coast of Sri-Lanka, a two-minute silence was observed.

Official ceremonies in Thailand marking one year after the tsunami were held in seven places on the territory of four provinces – Phuket, Phang Nga, Trang and Krabi. The prime minister of Thailand Thaksin Shinawatra took part in laying of the foundation for the monument to the victims of tsunami in Phang Nga National park.

Up to this moment the world community provided $11,4 billion for post-disaster relief. The leaders among those who provided these means are the US, Australia and AsianDevelopmentBank.Germany,the EU, Japan and the World Bank also allocated significant sums of money.

Although a year passed after tsunami hit Asian countries many people still keep on living in tent sites, are deprived of main social services and run the risk of violence. Last week human rights experts from the United Nations talked about these problems.

The experts urge the international community to be more active in helping the authorities of India, Indonesia, Sri-Lanka, Maldives, Thailand and Somali to restore the normal living conditions of the population, especially when it comes to the reconstruction of people's homes.

The UN experts also mention the fact that the humanitarian aid is distributed unfairly. They also express their concern about women and children who are still living in tent sites and are exposed to great danger.

Tourists are still afraid of spending their holidays in Thailand and Sri-Lanka, Gazeta reports. Maldives also suffer from the lack of tourists' interest. In October, for instance, the demand in tourism dropped by about 23 per cent.

However, while complaining about the lack of tourists, countries in Southeast Asia have not completed the restoration of their resorts yet. Thus, for example, Phi-Phi Island provides only 400 hotel rooms for tourists instead of the former 2000.

The only exception is probably Indonesia. According to the spokeswoman for the Russian Tourism Association, Irina Tyurina, the infrastructure of the main Indonesian resort Bali almost was not damaged and there were even more tourists coming here in March-September than before. However, the situation was spoilt by the bombings on 1 October. In October-November the tourist activity dropped by 37 per cent.

Nevertheless, experts from the World Tourism Organization say that the situation is improving slowly. Beach hotels at the resorts mention the increase of up to 80-90 per cent in room reservation for December and January.

Different catastrophes in 2005 lead to the death of 112 thousand people. According to the research conducted by a Swedish reinsurance company Swiss Re the total material damage reached $225 billion. While calculating the number of victims experts were taking into account not only natural disasters but also terrorist acts.

These figures can be called a historical record. In 2004 the damage from catastrophes and natural disasters was estimated at $105 dollars.

This year 90 thousand people were killed in Pakistan as a result of powerful earthquake. Many of them survived the catastrophe but were left without houses and died of cold weather, Interfax recalls.

In March 2,6 thousand people were killed in the earthquake on the island Sumatra. 600 people died when an earthquake hit Iran.

Although 90 per cent of the victims of natural disasters live in Asia, a small amount of all insurance payments falls to the share of this region. The reason for this is that not so many of the victims resort to the service of insurers. The largest compensation sums - $70 billion – account for the US clients.

After the damages caused by the hurricane Katrina insurance companies will have to make payments of $45 billion.