The US administration tries to do its best to discredit Putin's suggestion on the relocation of US air defense system from Europe to Asia, the Azerbaijan Republic. The Pentagon officials particularly say that Putin has acknowledged the threat from Iran. However, Iran has no claims against Russia, which could be clearly seen at recent Caspian talks in Teheran (read article). 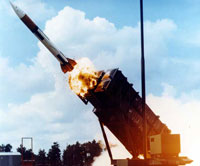 The meeting between Putin and Bush is set to take place in the USA on July 1-2. The two presidents are going to discuss Putin’s suggestions to use the radar station in Gabala, Azerbaijan, as an alternative for the deployment of the missile system in Eastern Europe.

In its essence, Putin made that suggestion to test Washington’s true intentions. If the USA is concerned about Europe’s security indeed, then it means that the radar station in Azerbaijan would suit that goal perfectly. In this case Washington would not have to change the balance of strategic forces in Europe. In addition, the US administration would not have to deal with Russia’s serious concerns on the matter. To crown it all, there would be practically no financial investments needed to take Iran’s missile plans under international control.

Putin’s suggestion became like a bucket of cold water dumped on President Bush. Russia nullified all previous agreements which the US achieved with Poland and the Czech Republic. Bush’s plans tumbled down like a house of cards during the G8 meeting in Germany. The USA started looking for new reasons to reject Moscow’s initiative.

It would be very good for the USA if Iran expressed serious concerns with such an offer from Russia. However, top Iranian officials stated that Russia never intended to destabilize or cause damage to the region, which Russia is a part of. Bush does not have reasons which would let the US administration proceed quickly with the deployment of the missile system in Europe. As a matter of fact, the USA only uses tricky words, which can be referred to as disinformation.

Russian experts responded to USA’s criticism to dot all i’s on the matter. The USA failed to discredit the Russian radar system in Azerbaijan. Pentagon officials said that it was not powerful enough to meet the USA’s demands. Quite on the contrary, the Gabala radar station is one of the most powerful radars in the world. It is capable of tracking down missile launches on a vast territory that reaches Australia and Africa.

In addition, US officials say that Russia’s suggestion to use the radar in Gabala means that Moscow has finally acknowledged the Iranian threat. The radar station would allow to estimate the real state of affairs and show a proper reaction to a possible threat on the part of Teheran.

Furthermore, Iran’s neighbouring states do not show any concerns about its “potential threat.” The above-mentioned Caspian talks in Teheran could only prove this affirmation: the ministers did not threaten each other but conducted fruitful negotiations.