Chinese authorities kill peasants protesting against withdrawal of their land

The Chinese authorities acknowledged the fact of killing three and wounding eight people during the suppression of a protest action in the country's south. 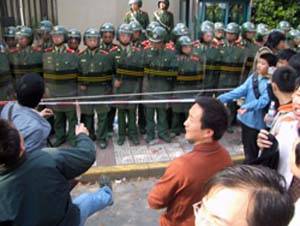 A large group of villagers from the province of Guangdong gathered near a newly-built electric power plant on Tuesday last week. The people intended to set out their protests against the low compensations for land withdrawn from them during the construction of the station. Several people were killed as a result of the clash with the police.

Xinhua news agency reported that the masterminds of the mutiny were acting in an unseemly way. The first attack on the electric station took place on December 5. The generation of electric power was suspended for seven hours as a result of the assault. The next day, about 170 people wielding knives, sticks, incendiary bottles and bombs organized another riot. The people used their arsenal in action attacking the electric station. They even managed to set the building on fire and damage several mechanisms. The police put down the mutiny very quickly; two of the attackers were arrested.

Up to 300 people came to save their arrested fellow-villagers later in the evening. One of the men told the police through a loudhailer that the arrested people be released and the cordons around the station be removed. Someone from the crowd threw several incendiary bottles at the police. The latter responded with preventive fire, which eventually resulted in victims under the cover of dark.

The locals say that up to 20 people were killed with automatic fire. An official, who ordered to open fire on the crowd, was reportedly arrested.

People's protests against corruption, exactions and withdrawal of farm lands have become frequent in China. About 74,000 protests sparked in China in 2004, according to the national authorities. However, all of the incidents ended with no victims. Specialists from Amnesty International believe that the events in Guangdong became the first occurrence since the tragic incident in 1989, when Chinese law-enforcement forces opened fire on protesters in Tiananmen Square.

Yakov Berger, a senior research assistant from the Far East Institute of the Russian Academy of Sciences, said that the appearance of the official information about the incident in Guangdong was a remarkable event. “The authorities show that they are not going to hide the truth. At the same time, they let other Chinese farmers know what such riots could lead to,” the specialist said.