“Come home to what?” This is the question, which most of the former evacuees ask when they hear the authorities inviting them back

Returning to New Orleans means a lot more than just going back home. Many do not have any homes to go back to: people have to rearrange their lives from the very beginning. New Orleanians have to rebuild not only their careers but also the whole community. The decision to go back is the hardest for those, who lost their loved ones as a result of the massive destruction caused by one of the most disastrous hurricanes, Katrina. 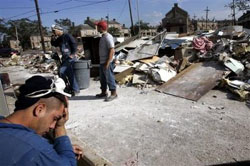 The authorities of New Orleans often remind people that they should feel blessed to have survived Katrina's impact. Possessions can be retrieved and saved again, although it can never happen with human life, officials say. But such reassurances sound meaningless for those who lost everything.

The 25-foot wall of water that burst through the levee forming the western boundary of New Orleans' Lower Ninth Ward after Hurricane Katrina had lifted the house off its foundation. The house had landed in the neighbor's yard, on top of a car, caked in mud, its lacy curtains shredded into filthy ribbons.

The Lower Ninth has been closed since the flooding, and residents had grown agitated over not being able to gain access to their property. Nagin relented, cautioning that the neighborhood - probably the hardest-hit pocket of the city - was not stable enough for people to move back. However, he said: "Everybody can get their stuff."

New Orleans' Mayor Ray Nagin said publicly that he wants all evacuees to come home, but most of them ask themselves a question: "Come home to what?"

Residents were allowed to return for the day to gather what belongings they could. Until now, people had been able to view the destruction only on bus tours. Some said they planned to abandon the area. Others vowed to rebuild. The neighborhood remained treacherous. Streets were clear, but hundreds of buildings were on the verge of collapse, and yards were full of broken glass, metal shards and boards studded with rusting nails, Oregonlive.com reports.

Rumors also prevent people from returning to New Orleans. Some people say big developers are coming in their town and building up the area. They also say that developers are striking deals to buy homes, repair them and sell them back to the original owners at a much higher price.

Katrina hit hardest those who owned some business in New Orleans. For them to restore their life and business at the place of natural disaster is much more difficult. Today in New Orleans, the owners of the restaurants are installing new coolers, fixing roofs and trying to replace wait staffs and cooks, instead of serving their clients. Of the 3,400 restaurants in the greater New Orleans area before Katrina, only 26 percent have reopened, said Tom Weatherly of the Louisiana Restaurant Association. Only about 300 of those are in the city.

"That's mostly the smaller restaurants - those that had damage on a smaller scale, had smaller coolers, had less work needed to return," officials say. However the life in New Orleans is beginning to normalize step by step. Greeted by welcome signs hung over the door and in the hallways, students began returning Monday to the first regular public school to reopen since Hurricane Katrina hit three months ago. Some private schools in New Orleans began reopening in October, but no public schools had opened, with the exception of a few charters that were outside the local board's control, according to the AP.