Japan to conjure another 'miracle'

The constitution of Japan has remained unchanged since 1947

Japanese Prime Minister Junichiro Koizumi says he is going to launch radical reforms and changes so that the country will be able to properly respond to various challenges. However, the constitution of Japan should be revised in order to adjust it to present-day requirements, according to Mr. Koizumi. 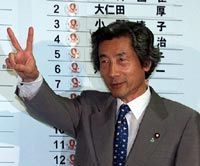 The above position mirrors the conclusions at which the Japanese government arrived during the 50th anniversary of the formation of the Liberal Democratic Party. In his address to the meeting on the occasion of the anniversary, Prime Minister Koizumi pointed out that the consecutive reforms put forth by his government aim to be a worthy continuation of the so-called Meiji Restoration which lead to the dramatic changes and transformed Japan into a powerful state.

“Two major reforms can be called the “miracles” in modern political history of Japan. The Maiji Restoration in 1867-68 is one of them. The other one is the reform that took place 60 years ago following our defeat in World War II,” said Mr. Koizumi. “We should be prepared for challenges and conflicts that may threaten the international community in the next 50 years,” added he.

The prime minister's initiatives look very much like significant changes in the domestic political platform. The changes are aimed at restoring Japan that is trying hard to become a top player at the international political scene. That is why the Japanese believe that their pride is wounded when somebody reminds them of their past (atrocities in China during WWII) or when they have to take steps in line with the faulty constitution.

There is only one solution, according to Tokyo. History books should be rewritten and “survivals” from the past pestering the fundamental law should be revised.

The constitution of Japan has remained unchanged since 1947. It was drawn up by U.S. occupation forces after the end of World War II. In accordance with the constitution, Japan may not have armed forces. The constitution also imposes a ban on Japan's military involvement in armed conflicts abroad. The above circumstance wounds Japan's national pride most.

Clause 2 of Article 9 of the constitution bans Japan from forming national armed forces. The government intends to amend it and upgrade the existing Military Agency to the level of Defense Ministry. In the new circumstances Japan hopes to take a more active part at the arena of international politics where the use of force becomes increasingly important.

Meanwhile, Japan has long acted outside the framework of the constitution. Observing the law was just a formality. About 600 Japanese servicemen have been stationed in Iraq since 2003. Parliament has recently extended for another year the mandate to support U.S. troops in the military operations in Central Asia.

Moreover, Tokyo has approved the U.S. proposal regarding deployment of a bomber capable of carrying nuclear weapons, Strafor reported some time ago. It is quite symbolic that the report about the bomber appeared on the same day when Koizumi's Liberal Democratic Party announced its plans regarding the revision of the constitution.

Tokyo has another argument in favor of a partial revision of the constitution. Japan has a fixation about getting permanent membership in the U.N. Security Council.

Despite the numerous appeals for a more active role of Japan in the international community, Koizumi's party is primarily concerned about the well-being of its own nation which is likely to vote on the amendments in a national referendum when the lawmakers approve them in parliament.

“It took nine days to draw the current constitution while it took them [Koizumi's Liberal Democratic Party] 50 years to come up with a new one,” said the former Prime Minister of Japan Yoshiro Mori.