Serbia pushes Russia aside despite long-standing friendship, turns to EU

Serbia believes that it is the European Union, which is to play the leading role in the regulation of the Balkan conflict

President of Serbia Boris Tadic arrived in Moscow with an official visit. The Serbian leader discussed a wide range of questions with Vladimir Putin: from the regulation of the Soviet debt to the former Yugoslavia to bilateral relations between Russia and Serbia in case the latter joins the European Union. The key subject of the talks between the Serbian and the Russian president was devoted to the situation in Kosovo and Russia's role in the regulation of Balkan conflicts. 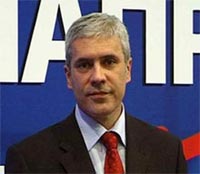 Serbia criticized Russia during and after the NATO-led bombing of Yugoslavia in 1999 claiming that Russia had taken an indistinct and inactive position. “Russia's role in the regulation of the conflict is immense. Russia is supposed to identify its position clearly, in the UN Security Council, first and foremost,” Boris Tadic said at the press conference after the end of the official meeting in the Kremlin.

Vladimir Putin strongly excluded the use of double standards policy pertaining to the expulsion of 200,000 Serbs from Kosovo. “About 200,000 Serbs have to leave Kosovo now, but everyone keeps silence about it,” the president of Russia said. Putin stressed out that Western officials referred to the exodus of 30,000 Albanians from Kosovo as a humanitarian catastrophe. Putin assured his Serbian colleague that Russia shared his opinion about Kosovo being the inseparable part of Serbia, even if it enjoys the status of an autonomy.

Answering a question from Pravda.Ru about the activities of The Hague Tribunal, Boris Tadic said that responsibility for war crimes committed on the territory of the former Yugoslavia should be placed on both Croatians, Muslim Bosnians and Albanians, but not only Serbs alone. “We must cooperate with the Tribunal in The Hague, but we demand the Tribunal should punish everyone for those crimes. I was exasperated about the silence of the international community in March of 2004, when Albanians slaughtered over 30 Serbs and burnt 35 Orthodox churches. Everyone guilty of the crimes must stand trial, we insist on that. Serbs should be given an opportunity to live quietly in Kosovo, and our temples should be recreated. This is our standpoint at the talks regarding Kosovo's status,” Tadic said.

The possible collapse of the Serbia-Montenegro federation into two separate states is another important subject on agenda of the talks. Montenegrin President Filip Vujanovic has already presented the “Treaty to transform the state community of Serbia and Montenegro into the union of independent and internationally acknowledged states.”The head of Montenegro presented this document to the Serbian administration and the president of the Serbia-Montenegro federation, Svetozar Marovic. In addition, Montenegro will hold the referendum of independence in the spring of 2006. The Serbian president expressed his protest against the further disintegration in the Balkans.

Despite the long history of friendly relations between Russia and Serbia, the latter believes that it is the European Union, which is to play the leading role in the regulation of the conflict. “We welcome Croatia's and Macedonia's membership in the European Union. We believe that our existence within the framework of the European Union will let us heal the wounds of the long-standing war a lot faster,” the president of Serbia said. Brussels should guarantee Serbia's territorial integrity, Boris Tadic believes, otherwise disintegration will take a grip on the whole of Europe.

While the Serbian president was setting off for his official visits to Moscow, the Prime Minister of the Czech Republic, Jiri Paroubek visited the cities of Belgrade and Pristina with a special mission. “Kosovo must have the European future,” the head of the Czech government said. Mr. Paroubek added that he could only welcome Belgrade's aspiration to become a EU member. To crown it all, Czech ex-president Vaclav Havel set out his wish to become an official mediator at the talks between the government of Serbia and the administration of Kosovo Albanians.

Serbian journalists pointed out after the end of Boris Tadic's press conference that the mission of the Czech officials may eventually bring certain progress. The relations between Serbia and the Czech Republic have always been positive since the 19th century. Czech students ruined the press conference of the former US Secretary of State Madeleine Albright in Brno, protesting against the bombings of Serbia. The Serbian nation remembers those and many other examples of Czech Republic's support to Serbia, whereas the European Union is ready to use these warm memories in its interests,” a Serbian journalist told Pravda.Ru.

Both Russian and Serbian experts, who accompanied the Serbian president in his visit to Russia, said that Tadic's visit to Moscow had definitely strengthened Russia's authority both in the Balkans and in Serbia. However, the Russian leadership will have to act more actively at this point and substantiate its opinions with definitive actions, otherwise Serbia may turn its back to Russia the same way Bulgaria did before.