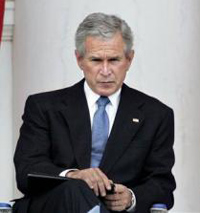 Bush threatened to impose the new U.S. sanctions in a speech last month. But he decided to hold off to give the U.N. secretary-general more time to find a diplomatic end to the four-year crisis in Darfur where more than 200,000 people have been killed.

Beyond the U.S. sanctions Bush was to announce Tuesday at the White House, the president also will direct Secretary of State Condoleezza Rice to draft a proposed U.N. resolution to strengthen international pressure on the Sudanese government of President Omar al-Bashir, according to two administration officials who briefed reporters Monday night.

Bush says al-Bashir's actions over the past few weeks "follow a long pattern of promising cooperation while finding new methods of obstruction," according to a draft of the remarks.

The sanctions will prohibit more companies in Sudan from using the U.S. financial system, stiffen enforcement of existing sanctions and target individuals suspected of fomenting violence, according to the officials who spoke on condition of anonymity so as not to pre-empt the president's remarks, the AP reports.

In 2004, the UN Security Council adopted a resolution calling on Sudan to end the attacks. But Bush and other top US officials have grown increasingly impatient with Sudan President's Omar Hassan al-Bashir's reluctance to stop attacks by Arab militias widely believed to be supported by the government.

Bashir also stalled for months in accepting UN peacekeeping support packages to the African Union of 7,000, a prelude to a large force of more than 23,000 troops and police. He received plans for that force only last week but has said the number of military personnel was far too large.

New US sanctions against Sudan would extend those implemented in 1997 and be aimed mostly at companies owned or controlled by the Sudanese government.

One other company is believed to be violating an arms embargo for Darfur and will also be banned from doing business in the United States or having access to its financial system.

The companies targeted will include firms in the oil and petroleum export-related businesses, all of which are crucial to Sudan's economy. They are all expected to be named.

The four individuals to be affected include senior Sudanese government officials and rebel leaders.

"This will be the first time we are taking such an action ahead of the United Nations," said a senior administration official about the sanctions against the individuals. The UN Security Council last year imposed sanctions on four mid-level individuals.

At the United Nations, the United States and Britain are considering drafting a resolution that would impose an arms embargo on all of Sudan, not just Darfur, increase the number of individuals subject to sanctions and monitor at airports in Sudan, preferably by the African Union to determine who is breaking previous council resolutions on offensive military flights, Reuters reports.

The new sanctions target an additional 31 companies, most owned or controlled by the Sudanese government, from the U.S. banking system.

The U.S. also is targeting three individuals. The sanctions will cut them off from the U.S. financial system and prevent them from doing business with U.S. companies or individuals. Two of the Sudanese individuals have alleged links to the janjaweed militias. The third is a senior rebel leader suspected of contributing to bloodshed and human rights violations in Darfur.

The U.N. resolution Bush is seeking would apply new international sanctions against the Sudanese government in Khartoum. It also would seek to impose an expanded embargo on arms sales to Sudan, prohibit Sudan's government from conducting offensive military flights over Darfur and strengthen the U.S. ability to monitor and report any violations.

The bloody conflict - which the Bush administration has labeled genocide - began when rebels from ethnic African tribes rose up against the Arab-led central government. The Sudanese government is accused of responding by unleashing the janjaweed militias of Arab nomads, blamed for indiscriminate killing. The government denies the charges, cbsnews.com reports.