The Buenos Aires' Legislature impeached on Monday local mayor Anibal Ibarra for his responsibility in a nightclub fire last year that killed 194 youth in Argentina's worst disaster in decades. Ibarra has been automatically suspended from office after 30 of 45 legislators voted against him and could only return to his post if the Legislature finds him not guilty within the next four months. 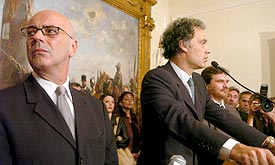 Families and friends of the victims, holding pictures of youths who perished in the fire, celebrated the decision outside the legislature with chanting and hugs. The fire on December 30, 2004, at the Republica Cromagnon club started when concert goers shot a flare into the ceiling, igniting flammable soundproofing.

“I won't resign”, said Ibarra shortly after being noticed of the decision of the Legislature. The mayor is a close ally of President Nestor Kirchner and analysts see Ibarra's impeachement as a serious setback for the national government only three weks after it obtained an overwhelming support in the midterm vote.

Kirchner's collaborators have been trying to avoid the impeachement, but they failed as one of their legislators voted against Ibarra. Right wing parties and leftist MP's gave the votes to impeach Ibarra.

Some 5,000 youths, far above the venue's permitted capacity, tried to escape the thick, black smoke, but found several of the emergency exits locked. Most died of smoke inhalation. Investigations turned up irregularities in the city's licensing and fire inspections for the club.