NATO is trying to intensify its activities in Russia's Caucasus. NATO officials have recently released two important statements. They particularly expressed their readiness to deploy NATO peacemakers in the conflict area of Nagorno Karabakh and render assistance in the cessation of long-standing hostility between Armenia and Turkey. 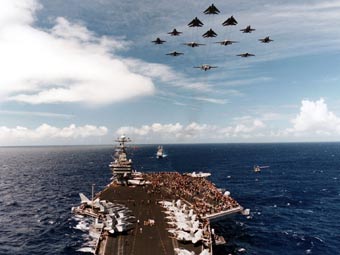 NATO officer in charge of communication with South Caucasus, Romualds Razhuks, stated that NATO could deploy its peacemaking contingent in Nagorno Karabakh. The officer specified that such a measure could be possible upon the agreement of all parts involved in the conflict. Razhuks stressed out that NATO would conduct close cooperation with the OCSE, since this organization plays the leading role in the conflict zone.

None of the sides of the Nagorno Karabakh conflict has supported the suggestion from the top NATO official yet. State officials from Armenia, Nagorno Karabakh and Azerbaijan withheld comments on the matter.

NATO also remembers that Armenia has been in conflict relations with one of its member-countries, Turkey. Armenia wants Turkey to acknowledge that the Turks conducted genocide against Armenians and slaughtered over 1.5 million people in 1915, although Turkey strongly refuses to do it. “We realize that Armenia has serious problems with Turkey. Turkey is a member of NATO, but we believe that NATO should be used as a forum to solve current problems,” NATO SecGen's Special Representative for the South Caucasus and Central Asia, Robert Simmons said.

Pravda.Ru asked the chairman of the Caucasus Department of the CIS Institute, Mikhail Alexandrov, to comment on NATO's intention to interfere in political affairs on the post-Soviet space.

”If the feuding parties of the Nagorno Karabakh conflict agree upon the deployment of NATO peacemakers in the area, the alliance will definitely consider the issue. It was a rather diplomatic suggestion on the part of the alliance, which will continue offering its services in the future too. NATO has two major objectives in the Caucasus: to oust Russia and encircle Iran. The alliance would also like to affect Central Asia and threaten China afterwards.

”For the time being, however, the offer to deploy NATO peacemakers in Nagorno Karabakh is not good for any parts of the conflict. If Azerbaijan could agree upon it, it would ruin its relations with Russia and Iran. The latter has repeatedly protested against NATO's presence in the region. This is something that Azerbaijan cannot afford.

”Armenia and Karabakh do not want to lose Russia's support. There are certain pro-Western sentiments, but the West will eventually make Armenia acknowledge that Nagorno Karabakh is an Azeri constituent. Armenia is much less important for the West as opposed to Azerbaijan: this republic is rich with oil and has access to the Caspian Sea too.

”NATO officials have been dwelling upon the subject of Turkey's relations with Armenia for years already. However, things still remain as they are: Armenia and Turkey do not have diplomatic relations with each other. The question of acknowledging the 1915 genocide carried out by Turkey is the bone of contention in the relations between Turkey and Armenia. This is not only a matter of a formal official statement: it may follow with financial and even territorial claims. Turkish diplomacy is rather experienced to take up such an initiative at this point. Turkey does not acknowledge the fact of genocide even if it becomes an obstacle for its EU membership. Armenia, in its turn, is not going to give up its requirement,” Mikhail Alexandrov said.