A politician says that if the U.S. doesn't pass a free-trade agreement, his country could be forced to withdraw the anti-drug plan. 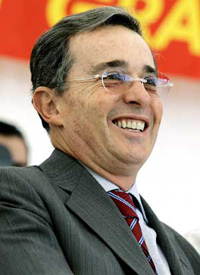 As faces the biggest political scandal of his five year mandate, Colombian President Alvaro Uribe puts pressure over US Congressmen to seal a free-trade deal with Washington. On Wednesday, a prominent politician closely allied with Uribe said his nation should pull out of a U.S.-financed effort to fight drug trafficking and terrorism if the American Congress does not pass a free-trade agreement with his country.

Sen. Carlos Garcia, a presidential aspirant and leader of the largest bloc in Colombia's Congress, said in an interview that the failure to pass the trade accord could force the government to withdraw from Plan Colombia, which has cost the United States about $5 billion over seven years.

"If the U.S. Congress does not support Colombia in expanding its markets, there is absolutely no reason to accept Plan Colombia aid. That's just one component of the solution. The best way out of poverty and the cultivation of illegal crops is the marketplace," said Garcia, who heads Uribe's Social National Unity Party.

Garcia’s remarks come as President Uribe faces a major political scandal, as many of his closer collaborators in Congress were requested by local courts for financing death-squads and illegal paramilitary groups to obtain support for their political campaigns. The Colombian opposition believes that the conservative leader, reelected last year by an overwhelming majority, is also connected with the scandal.

The controversy over the free-trade deal has also shattered Uribe’s government, as the opposition blames it goes against national interests. Also, the country’s second largest marxists guerrilla group recently conditioned peace talks to a government’s decision to drop the free-trade pact.

Setting new conditions for peace, the National Liberation Army (ELN) also demanded a freeze of all privatization of state companies, including the Cartagena oil refinery and 20 percent of the state oil company ECOPETROL. "It is necessary to freeze the approval of the FTA because it hurts the sovereignty and future of our nation, and the interests of a majority of Colombians," the ELN said in a statement issued in Havana, referring to the trade agreement.

In an a attempt to challenge critics, Uribe told an audience of national police Friday that Colombia would not accept treatment as a "pariah" and pointedly told representatives of the U.S. Embassy in attendance to "take that message back to your Congress." According to witnesses, the harsh tone of Uribe's remarks was unusual.

Uribe’s bid in the US Congress is far from being succesfull, as the Democratic majority looks reluctant to ratify the deal, as narco-politics scandals daily erupt in Colombia. Democrats already were unhappy about weak environmental protection and the slayings of scores of Colombian labor union organizers in recent years and said that parts of the trade agreement completed last summer would have to be rewritten.

The opposition to US President George W. Bush considers that Uribe has a poor human rights record and suspects of his ties with the paramilitary groups, which count with a significative record of massacres, kidnappings, drug-smugling and extorsion.