The euro goes down as Paris suburbs being torched

It is quite natural that 13 days of nighttime unrest on the streets of Parisian suburbs had an overall negative impact on the economic situation in France. The riots impacted the EU financial system since the France is one of the “driving belts” of the EU. The events triggered the so called negative investment and virtually toppled the exchange rate of the single European currency. Yesterday the euro fell to all-time low at the Moscow Interbank Currency Exchange: 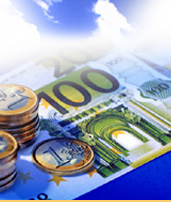 it became cheaper nearly by 50 kopeks down to 33.94 rubles. The dollar soared dramatically going up from 28.55 rubles to 28.75 rubles, a record high for the last four years. The trend is also in progress at the Asian foreign currency markets. The exchange rate of the euro keeps going down while experts predict further dollar increase over the course of the week.

These days even experts are reluctant to make long-term forecasts and predict the consequences caused by the financial “swing.” “I do not know at the moment how the trend can impact Russia. We should figure out how it can affect the European currency in the first place,” said Igor Lavushchenko, an analyst of Prospekt investment company, in an interview to Utro. “Speaking of the EU economic situation, clouds are beginning to appear on the horizon. If things remain unchanged, the euro may cost $1.10-$1.12,” said Mr. Lavushchenko.

It is true that the riots in France (pictures) were not the only reason behind the steep decline of the euro. The euro went down following the decision of the European Central Bank to maintain the 2% refinancing rate. Given an increase in the interest rate by U.S. Federal Reserve, international investors had to convert their assets into U.S. dollars. In the meantime, the dollar stood strong after the latest figures on unemployment were released on November 4th. The good news for the dollar also had to do with a capital repatriation program launched by the U.S. government, it should bring back an estimated $100 billion by the end of the year. The money will be invested in the home economy.

However, the dollar may drop as fast as it recently rose while the euro may regain its position. The dollar had a sharp fall following the September 11th attacks but the American currency managed to straighten up its exchange rate after a short period of turmoil. The scenario looks very real today. The dollar may hit its upper limit of 29 rubles by the end of the week. Some time later, should the unrest in France draw to an end and investors come back to Europe, the dollar's exchange rate will slide back down.