A regional presidential summit in Mar del Plata, Argentina, unveiled two different approaches to the controversial free trade agreement promoted by the US

The fourth Summit of the Americas that joined in Mar del Plata, Argentina, 34 leaders of the region – all except Cuba  - left the continent split in two over the advance of the negotiations for the Free Trade Area of the Americas (FTAA) promoted by the United States. While Washington and other 28 countries believe conditions are adequate to go forward, the most powerful economies of South America – Brazil, Argentina and Venezuela - together with Paraguay and Uruguay made clear that it is not possible to resume talks until the US and other potential partners change some of their trade and economic policies. 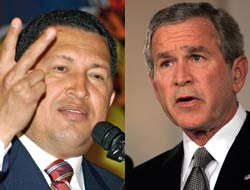 Since the beginning, the position over the FTAA appeared as the most controversial issue in a summit that intended to promote the creation of jobs to “fight poverty and strengthen the democratic governance.” The US President George W. Bush arrived in Mar del Plata on Thursday night when foreign ministers were discussing the final wording of the declaration, which was not ready until Saturday evening, four hours after the Air Force One headed to Brazil.

The mood in the Summit was particular, as soon the two positions became clear and had their main spokesmen. The Venezuelan President Hugo Chavez, an open Bush's political foe, addressed a two hours speech to a crowd of anti-FTAA protesters, in which predicted that Mar del Plata was meant to be “the tomb of the FTAA.” The Mexican President Vicente Fox replied: “There are 29 countries willing to advance on the FTAA, we can do it without the other five.” The leaders of Colombia, Alvaro Uribe, and Chile, Ricardo Lagos, tried to mediate between them.

Bush kept silent all over the weekend, mainly since groups of protesters clashed with the police outside the restricted area where negotiations were taking place. Even when the street violence were not significant, the anti-Bush nature of the demonstrations led to a confession of the most powerful man of the world: “I might not be an easy guest,” he told Argentine President Nestor Kirchner, after a bilateral meeting on Friday.

By that time, leaders could not hide the controversy. The FTAA, envisioned by President Clinton and later embraced by Bush, foresees a free-trade zone that would stretch almost from the Arctic to the Antarctic. It would affect farmers, manufacturers, and consumers. Supporters say it would boost productivity, create jobs, and raise standards of living across a region plagued by poverty. Detractors believe that the FTAA would level local industries and benefit multinational monopolies.

The battle over the FTAA lasted until only three presidents remained in talks, late in Saturday afternoon. They batted around three proposals, with the main point of contention being whether to resume FTAA talks in April 2006. But even when the presidents took over, the negotiations produced no compromise language that all 34 summit leaders could sign. So the summiteers codified the split that everyone knew existed: 29 nations, led by the United States and Mexico, vowed to get their negotiators moving next year on how to address FTAA's problems and reach an agreement. The five others will wait to see, among other things, whether the United States can reach a deal with the European Union and slash some of its tens of billions of dollars in agricultural subsidies.

“We were like five musketeers,” said Chavez during a one hour news conference after the Summit. “Today's negotiation was something that I have not ever seen in a summit like this. It was intense and sincere.”

Despite his flourished rhetoric, Chavez made use of the same words that Bush, Kirchner and other leaders said during the summit. Lagos said it was “transparent,” Kirchner said it was “crude” and Bush said it was “sincere.”

At the end of the two days struggle, the Argentine Foreign Minister, Rafael Bielsa and other delegates denied that the split over trade had made the summit a failure. They had to made big efforts because journalists did not believe that.