After weeks of uncertainty, Bolivia's interim President Eduardo Rodriguez confirmed this week that the presidential poll will be held on 18 December, as imposed new rules on distributing congress seats to end a row threatening forthcoming elections. Rodriguez's decision has been welcomed by candidates, social and political leaders because the dispute over seats has already led to the vote being postponed once. 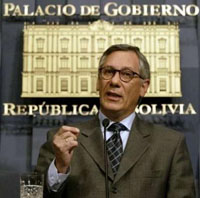 "These are difficult times and we are doing this to saving democracy, and we hope the citizens will follow us in this effort," said Mr Rodriguez. The oil rich regions of Santa Cruz de la Sierra and Tarija demanded a broader representation at the National Congress, whcih they say is overcrowded with posts for the populated but poor Andean regions.

Rodriguez conceded Santa Cruz de la Sierra three seats and Cochabamba one ruling against the interests of the seven remaining provinces. Now all provinces have said they back the new proposals, which are based on the latest census including the economically important Santa Cruz. The province of La Paz along with the poorer Potosi and Oruro will lose seats.

Mr Rodriguez has said that he will step down in January even if an election has not been held, leaving the possibility of a power vacuum. The interim government had hoped the election would help ease divisions over how to develop the energy industry, and how much autonomy Bolivia's diverse provinces should enjoy.

Now, candidates resumed their campaigns. According to recent opinion polls, the leftist farmer's leader Evo Morales, is at the top of the preferences with a 35%, followed by the conservative US-educated engeneer Jorge Quiroga (30%). Mr. Morales is in Argentina to protest Bush presence in South America to attend the Fourth Summit of the Americas.

Both candidates agreed Rodriguez's decision. Morales said it would guarantee a change in Bolivian politics that the population had been clamouring for. The government has made a political, legitimate, and democratic decision," he said. Quiroga, in turn, said: "We hope now we can focus people's attention now on our proposals, explain them, and get to the polls with all Bolivians."