If one recollects the first stage of the US-led incursion in Iraq - the formation of the public opinion against the background of the forthcoming war - it may seem that Italy was not too willing to oppose to the argumentation of the US administration, which said that the Iraqi leader Saddam Hussein intended to use weapons of mass destruction. 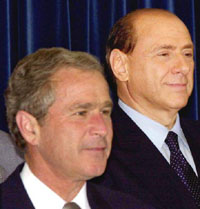 Silvio Berlusconi could back up the tough political course of the US president in the beginning of his career on the position of the Italian prime minister. Such a decision was considered a political step of quite good perspectives back then. There were only two European states – Germany and France – that protested against the USA's decision to invade Iraq. The US administration harshly criticized the governments of the two European old-timers: the memory of the horrendous September 11 attacks was rather fresh.

However, the war in Iraq has quickly lost its erstwhile international popularity. USA's allies started paying more attention to their national problems. The Iraqi issue could have been forgotten long ago, but Iraqi rebels do not seem to give up their strong resistance to the US-led occupation, which has already resulted in the significant loss of the 2000th American soldier in the war-torn country. One may thus infer that the USA's experiment in Iraq has been dragging on too long: it is one of the most serious errors that the White House has made in its Iraqi policies.

In the meantime, the USA had to face another unpleasant problem in the beginning of the current week, when Italian Prime Minister Silvio Berlusconi attracted the world's attention to the Persian Gulf. The head of the Italian government said in a TV interview that he had tried to convince the US administration of the need to leave Iraq alone and not to make thoughtless actions.

"I have never been convinced war was the best way to succeed in making a country democratic and extract it from an albeit bloody dictatorship," Berlusconi pointed out. "I tried on several occasions to convince the American president not to wage war."

Berlusconi's deputy, Gianfranco Fini, immediately supported Berlusconi's initiative: "We tried right up to the end to persuade Bush and Blair not to launch a military attack." In addition, the Il Giornale newspaper (owned by the Berlusconis) reminded at this point that the Italian prime minister used to disagree with US President Bush on the same question in November of 2003. It just so happens that Silvio Berlusconi has managed to express two contradictory opinions almost simultaneously. The prime minister said in 2003 too that the use of military force against Saddam Hussein's regime was justifiable, and Italy was therefore supposed to support the USA in its anti-terrorist initiatives.