The report supposedly exposes the companies, the native countries of which refused to participate in the US-led war in Iraq

The report from the UN committee headed by Paul Volcker about the intrigues connected with the implementation of the Oil for Food program was exposed last week. The report particularly highlights the activities of Russian politicians and companies in Iraq. However, some evidence of their involvement in illegal affairs was hearsay. 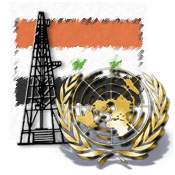 The story started in 1996, when the UN paid attention to lamentable consequences that the people of Iraq were suffering from due to international sanctions. The UN decided to give the impoverished country an opportunity to export a part of its oil in return to food deliveries. The implementation of the Oil for Food program was handed to private-owned companies and public organizations from all over the world. The program was in effect until the spring of 2003, when US troops and their allies invaded Iraq and removed Saddam Hussein from power.

A corruption scandal broke out in the UN administration soon after that. US law-enforcement authorities accused Kofi Annan's son, Kojo Annan, of financial fraud, whereas the Oil for Food program became the central point of accusations. As a result, the UN established a special committee to investigate the fraud and appointed the former head of the US Reserve System, Paul Volcker, its head. The issue of Russia's traces in the scandal surfaced almost immediately.

Alexander Yakovlev, an employee of the UN's procurement committee, was arrested in August of this year. The official pleaded guilty to accusations of bribery in the sum of $1 million. He was referred to as an employee of the Russian mission in the UN, although Yakovlev did not work in the Foreign Affairs Ministry of Russia. A similar story happened with the chairman of the advisory committee for administrative and budget issues of the UN General Assembly, Vladimir Kuznetsov. However, the members of the committee said that they had evidence to prove that Russian officials and large companies were involved in fraudulent activities within the framework of the Oil for Food program.

The report from the UN committee contained the names of over 2,000 firms from 66 countries of the globe, which, as rapporteurs believe, bribed Iraqi politicians in the total sum of $1.8 billion. The report says that Saddam Hussein added $13 billion to his treasury, whereas illegal operations conducted within the scope of the UN's program totaled over $64 billion.

According to conclusions made by Volcker's committee, Russia's share in the bribes made up over $19 billion. Twenty-five pages of the 623-page report (pp.22-46) are devoted to Russia. It is noteworthy that the report supposedly exposes the companies, the native countries of which refused to participate in the US-led war in Iraq. In addition to Russia, the Volcker's committee mentioned companies and public organization from France, Germany and Sweden. Needless to say that there are hardly any US representatives in the document at all.

Over 30 Russian organizations and companies are suspected of their participation in financial crimes committed during the implementation of the Oil for Food program. The list includes such well-known Russian companies as RAO UES of Russia, Lukoil, TNK, Slavneft, Yukos and some others. Oil giant Lukoil had the largest contract among other Russian companies on the list. Developing  an Iraqi oil deposit, the concern was closely cooperating with American oil companies, the names of which cannot be found on all the 623 pages of the UN's report.

The report also mentions two names of well-known Russian politicians, who visited Saddam Hussein on several occasions – the communist party leader Gennady Zyuganov and the leader of the Liberal and Democratic Party, Vladimir Zhirinovsky. The UN's report claims that Zyuganov's party received 125 million barrels of oil, whereas Zhirinovsky's party supposedly obtained 73 million barrels of oil. However, public organizations were not forbidden to partake in food deliveries and receive oil for them in return.

The report also mentions the Foreign Affairs Ministry of Russia and even the Russian Orthodox Church: Russian priests visited Iraq on several occasions and were thus suspected of illegal activities. To crown it all, Alexander Voloshin, the former head of the presidential administration, found himself involved in the oil scandal too.

Sergei Lavrov, the head of the Russian Ministry for Foreign Affairs, who has been working as an official spokesman for Russia in the UN, was rather outspoken in his comments regarding the scandal. “I have not seen the report itself, but I do believe that one should scrutinize all the facts that can be found there. We have repeatedly contacted Mr. Volcker's committee, but the documents, which they showed to us, were fabricated: the signatures were not genuine,” Interfax quoted Sergei Lavrov as saying.

An official spokesman for the Russian Ministry for Foreign Affairs, Mikhail Kamynin, expanded on the above-mentioned statement from the minister: “If forgery is proved, Russia will take all adequate measures,” the official said. Mr. Kamynin apparently believed that Russia, as well as other states mentioned in the report, may file a lawsuit to defend their honour and dignity.

Both Russian and foreign specialists believe that the UN administration simply tries to shift blame in an attempt to save its officials from any further corruption scandals. Paul Volcker stated himself that corruption would never reach such impressive scale, if there were law and order in the United Nations Organization.