Iran's President Ahmadinejad makes a storm in a teacup

Friday October 28, a demonstration in support of President Ahmadinejad gathered several thousands of people in Teheran

Iranian President Mahmoud Ahmadinejad spoke at an international conference "The World Without Zionism" in Teheran October 26 and said that Israel should “be wiped off the map.” In response, world politicians including Palestinians condemned Ahmadinejad's words. At the same time, the West once again stated Iran's nuclear program was dangerous, and Israeli foreign minister urged to expel Iran from the United Nations. 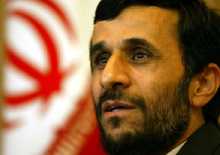 Organizing the conference every year, Iran emphasizes its solidarity with Palestinians. This year, 3,000 people representing Muslim communities of the world came to the Iran capital for the conference. During the conference, the city was decorated with posters saying "Death to Israel!" and "Death to the US!" Iranian President Mahmoud Ahmadinejad became the key speaker at the conference.

As concerning the blasts in the Israeli city of Hadera that killed five people, the Iranian president said “there is no doubt that the new wave (of attacks) in Palestine would wipe off this stigma (Israel) from the face of the Islamic world.” After that, Ahmadinejad repeated the words of Iran's revolutionary leader, Ayatollah Ruhollah Khomeini, who said the Zionist community must be wiped off the face of the world. “The Islamic world will not let its long-standing enemy live in the very center of the Muslim world.”

Ahmadinejad warned the Arab nations against cooperation with Israel and the US; the Iranian president believes that Zionists also rule in the US. “Anybody who recognizes Israel will burn in the fire of the Islamic nation's fury; any (Islamic leader) who recognizes the Zionist regime is acknowledging the surrender and defeat of the Islamic world," he said. He called the US the main terrorist in the world and said in conclusion that the divine power will soon help the world live without the US and Israel.

As could be expected, the reaction of the West was rather harsh. In connection with the scandalous statements, Britain and the US emphasized that Iran's nuclear program was particularly dangerous. The British Foreign Office called Ahmadinejad's words deeply disturbing and sickening, and added that Iran's intention to wipe Israel off the map would even intensify the alarm as concerning nuclear ambitions of the Islamic republic. Spokesperson for the US Department of State Sean McCormack said the statements of the Iranian president just proved the anxiety of the US and the international community in connection with Iran's attempts to get nuclear weapons. Almost all of western countries have given protest notes to Iranian ambassadors.

Israeli representatives' reaction to the words of the Iran president was the harshest. Vice-premier Shimon Peres said that extremists usually prove their words with action. “I cannot imaginehow the leader of aUN member could make such a statement. We cannot bear with it. Iran may no longer remain a UN member,” he said. Israel Prime Minister Ariel Sharon backed the opinion.

Russia's Minister for Foreign Affairs Sergei Lavrov thinks that those who insisted that Iran's nuclear dossier must be handed over to the UN Security Council have got more arguments in their own favor. He said the issue was too serious to diverge from the basic criterion on non-admission of breaking the non-proliferation regime. Iran's ambassador to Russia was summoned to the Russian Federation Foreign Ministry where he was told Russia was deeply anxious about the statements of the Iranian president.

Friday October 28, a demonstration in support of President Ahmadinejad gathered several thousands of people in Teheran. But the demonstration gave no rise to enthusiasm in the Arab world. Before the demonstration began, head of the negotiations department at the Palestine Liberation Organization Saib Uraiqat said the words of the Iranian president were inadmissible. “We have recognized the sate of Israel and we are promoting the peace process with Israel, that is why the statement of Iran's president is inadmissible for us,” he said. Other Arab nations allowed no comments on the issue.

In an interview to Pravda.ru, a leading research officer of the Russian Academy of Sciences Institute for Oriental Studies, Vladimir Isayev, said Ahmadinejad's statement was a mere PR action, and from the very beginning there was little chance that the statement would be popular among Palestinians and other Arab nations. “Iran has no chance to become the leader in the Islamic world because Arabs will on no condition agree to be under Iran. Even Palestinians, with the exception of Hizbollah, cannot bear them. There is hardly a person who can say how many times Arabs and Persians were at war with each other. Those were basically religious conflicts: the majority of Arabs are Sunnis,  and Iran is inhabited by Shiites. Arabs for instance never say the Persian Gulf the way we do, they call it the Arabian Gulf.”

Vladimir Isayev believes the statement from the Iranian president will have no considerable effect upon the Mideast situation because Palestinian leaders have long ago given up the idea of liquidating Israel, and Iran is at the same time a large oil exporter. “As for Palestinians, they, as well as all Arabs, have long ago given up the idea of throwing Israel into the sea. No one will let them do it or liquidate Palestine. Everybody realizes perfectly well that they will have to live side by side. The statement will hardly entail bombing of Iran either. All countries need Iranian oil. And it is unlikely that Iran will be expelled from the United Nations."