After leaving Downing Street Tony Blair is entitled to an immediate prime minister's pension of $126,000 and he will still earn a MP's salary of $120,000 a year. However Tony Blair is only 54 and he most likely will decide to continue his career in some other field. 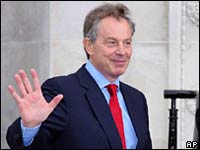 Tony Blair is to become a roving ambassador in Africa and the Middle East when he leaves Downing Street in an attempt to rebuild his tarnished reputation, The Daily Telegraph says.

The Prime Minister is to spurn the chance to earn up to $20 million a year on the international lecture circuit by concentrating on raising money for his new Blair Foundation, which will fund humanitarian work in Africa.

Last year, on one particularly lucrative day in Canada, Bill Clinton made $475,000 for two speeches. This was more than double his annual salary as President.

Wesley Neff, president of the New York-based Leigh Speaking Bureau, thinks Mr Blair's future as a speaker is "bigger than Bill Clinton's", since "he will be the first world leader to come on the market in the last three or four years".

Mrs Blair has already appeared on the professional lecture circuit. She reportedly charged $200,000 for a tour of Australia and $60,000 for a single event in the US, BBC reports.

Cherie Blair, repeatedly accused of cashing in on her husband’s name with lucrative speaking tours, is likely to "piggy back" on his bankability by arranging her own lecture dates to coincide with his schedule.

The international speaking circuit which will provide the Blairs with the long-term income to top up the Prime Minister’s $234,500 a year pension and $180,000 annual ‘public service’ allowance which are his for life.

Mr Blair’s thirst for peace in the Middle East is said to have been reinvigorated by the success of restoring power-sharing to Northern Ireland, dailymail.co.uk reports.

Mr Blair has also agreed to a request from President George W Bush that he will fly in to the Middle East when requested as a special envoy to try to revive the stalled peace process.

The Prime Minister is being advised by four trusted confidants who have held a number of private dinners in London since the start of the year to help him map out a career plan after he leaves office, telegraph.co.uk reports.