The Iraq war has been a lonely quest for President George W. Bush, but it has been less so thanks to the unwavering backing of British Prime Minister Tony Blair. 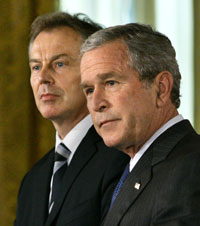 Blair is stepping down on June 27 after a decade in power, and no issue during his tenure is leaving a more indelible imprint than his no-apologies support for the U.S.-led war effort.

Bush seemed optimistic Thursday about the possibility of continuity on Iraq between Blair and his likely successor, Chancellor of the Exchequer Gordon Brown, the government's financial chief.

The president told reporters on Thursday that he believes Brown "understands the consequences of failure" in Iraq. As Bush sees it, a U.S. defeat would give a boost to terror everywhere.

Britain ranks second, after the United States, in terms of troops committed to Iraq. The British total is 7,100 but a reduction to 5,000 is planned for late this year.

With Blair's announcement, Bush faces the final 19 months of his term in office without his closest ally and, as the president described him, "good friend."

The two appear to have a relaxed relationship. In Russia last year, unaware that a nearby microphone was on, Bush was heard to greet his colleague with a "Yo, Blair," leaving the prime minister embarrassed.

While there was shared anguish over the maelstrom in Iraq, neither leader has given any hint of regret over the venture. Both have paid a dear price politically, scoring under 30 percent in polls, the fallout from a war that is highly unpopular in both the United States and Britain.

Julianne Smith, of the Center for Strategic and International Studies, said there is no question that Blair's legacy "will suffer from the stain of Iraq."

Blair, she said, was content to "cozy up to the United States to the bitter end, refusing to look back and question his choice."

Charles Kupchan, of the Council on Foreign Relations, said Blair "leaves under a cloud, having lost the confidence of his own party and with the Conservatives well ahead in the polls."

A month ago, Brown met with Bush for the first time without Blair being present. The two men spoke for a half-hour after Bush dropped in on a meeting between Brown and U.S. national security adviser Stephen Hadley. Brown was in Washington for meetings at the World Bank and the International Monetary Fund.

"I have found him to be an open and engaging person," Bush said, also describing him as an "easy-to-talk-to, good thinker."

On Iraq, Brown had promised to "spend what it takes" to disarm Saddam Hussein's Iraq. He is expected to keep British troops in Iraq for the near future, and to maintain Britain's strong relationship with America.

While Brown's ultimate course on Iraq is unclear, Europe has been generally projecting a friendlier image toward the United States. The latest concrete example is the recent election of Nicolas Sarkozy as president of France, which followed the accession in Germany of Chancellor Angela Merkel in late 2005.