British Prime Minister Tony Blair is expected to announce his intention to step down as Labour Party leader Thursday, ending weeks of speculation about his departure and setting the clock ticking on the final weeks of his 10-year premiership. 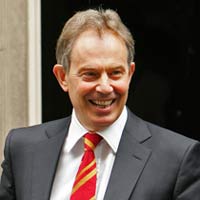 Blair's official spokesman said the prime minister would set out his intentions to Cabinet colleagues on Thursday morning. He is then expected to travel to his Sedgefield constituency in northern England to make a public announcement.

Speculation about Blair's resignation date has swirled for weeks, and intensified after he celebrated the landmark of 10 years in power on May 1.

In British parliamentary tradition, the leader of the largest party in the House of Commons serves as prime minister. Blair's announcement that he is stepping down as Labour leader will trigger a leadership contest that would see him replaced as party leader, and prime minister, within about seven weeks.

Treasury chief Gordon Brown, Blair's longtime friend and rival, is the favorite to succeed him, although two backbench Labour lawmakers also have announced their intention to run.

Blair's announcement has been awaited ever since September 30, 2004, when he said in a television interview that he would serve only one more term -- his third -- as prime minister.

The announcement, made at the time he was facing a surgical procedure to correct a heart problem, was one he came to regret, as opponents, party rivals and the media pressed him to set a date for his departure.

In September, Blair told delegates at Labour's annual conference that it would be his last as party leader.

Dogged by the unpopular war in Iraq and weakened within his own party, the once-unassailable Blair came to be seen as a lame duck.

Conservative leader David Cameron on Thursday accused Blair of being "a prime minister who ... simply doesn't understand that it's over."

Prime ministers recently have tended to stay on in the House of Commons for a time, the AP reports.

Under Britain's constitution, as Labour leader Brown would also become prime minister and would not have to fight a general election until May 2010 at the latest.

Blair and Brown were the twin architects of Labour's rise to power in 1997 after 18 years in the political wilderness and Britain's long-serving finance minister is now certain to finally get the job he has coveted for so long.

His chief challenge will be to revive support for Labour and overhaul the opposition Conservatives in the opinion polls before the next election.

Conservative leader David Cameron, 40, has revitalised the party of Margaret Thatcher -- the only premier to outlast Blair in the past century -- and Winston Churchill since he became leader in 2005, and polls suggest he could win a slim majority in parliament in a national election.

Brown is widely respected for presiding over a decade of strong economic growth and for granting independence to Britain's central bank to set interest rates.

He has also overseen huge increases in spending on education and health. But Labour has not been rewarded by the electorate for its public service spending and Brown does not have the charismatic charm that helped Blair rule for a decade, Reuters reports.