The Venezuelan President said he will personally lead the operations backed by the country’s military. 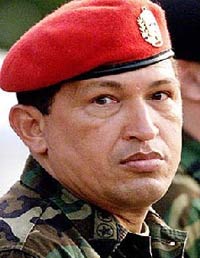 As announced two weeks ago, the Venezuelan President, Hugo Chavez, is expected to lead on Workers’ Day the military operations aimed to recover control of the Orinoco basin, which is considered by analysts the world’s major oil reserve. The leftist leader had said that if foreign companies do not agree with the new contractual terms offered by the Venezuelan State, fields would be taken with the use of force.

Chavez’s move is part of a radical plan to nationalize key sectors of the nation’s economy announced shortly after the President was reelected by an appalling majority. Caracas has already nationalized the telecommunications industry and the national electricity company.

On Tuesday, BP PLC, ConocoPhillips, Exxon Mobil Corp., Chevron Corp., France's Total SA and Norway's Statoil ASA will turn over their Orinoco operations to Venezuela's state oil company, Petroleos de Venezuela SA. Chavez, who says he is reclaiming the oil industry after years of private exploitation, is expected to be accompanied by troops and workers clad in revolutionary red amid fly-bys by the military's new Russian-made fighter jets.

"We are going to take over some oil fields that have continued to be in the hands of transnationals," Chavez said in a speech to allied leaders Sunday, calling it "the last step" in recovering state sovereignty over oil.

According to observers, forcing Big Oil to give up control of Venezuela's most promising oil fields this week will be relatively easy for President Hugo Chavez, but he will face a more delicate challenge in getting the world's top oil companies to stay and keep investing.

New contractual terms state that new joint-ventures will have a minimum participation of PDVSA of 60%, leaving the remaining 40% to private companies. Chavez is not ready to take full control of the fields, as needs private investment to develop what can be the the planet's largest known oil deposit, possibly to surpass Saudi Arabia as the nation with the most reserves.

According to observers, over $ 50 billion is needed to pump up the heavy-crud deposited in the fields, which is one of the poorest quality available. Therefore, the Orinoco basin is only profitable with prices over $ 40 per barrel, something that is guaranteed, according to current market conditions.

Irving, Texas-based Exxon Mobil's Rex Tillerson told Dow Jones Newswires and the Wall Street Journal that unless the negotiations produce a profitable proposal, "everything else is moot because we won't be staying." "I'm realistic. I've said to them it may not work out," Tillerson said.

Six out of the seven companies operating in the Orinoco have accepted new conditions. The US ConocoPhilips is the only one that has refused to turn over the fields, which can lead to a military occupation of its premises and a subsequent demand filed before international courts .