The euro rate dropped to its all-time minimum over the recent two years on the Russian market on Tuesday. One euro costs 34.12 Russian rubles today: a similar price level of the European currency was registered only in September of 2003. The euro rate dropped in Russia on account of the current dynamics of the international market, where the dollar neared the euro and thus set the maximum level of the current year. The euro lost over 1.5 percent of its value against the dollar within only one day. 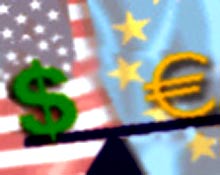 The dollar rate easily conquered the level of 1.20 on Monday, Elena Khrupova, an analyst with BrokerCreditService said. The 1.20 level, the specialist said, was the key index for many market specialists. They were expecting that central banks of several states, which previously announced their intention to diversify gold and forex reserves, would participate in the market affairs as soon as the dollar rate reached the above-mentioned limit. “However, world central banks have recently changed their attitude to the European currency and looked at it in a more critical way,” Khrupova said. Such a change has been caused with the ongoing political crisis in Germany. It became known on Monday that Angela Merkel's block of German Christian Democrats won the final stage of the parliamentary elections. Such a turn of events has only intensified the political conflict: few analysts believe in a possibility to form a viable coalition government, which consequently casts doubts on the fate of economic reforms in Germany. “There is nothing worse than having such an indefinite situation in one of the largest economies of the European Union,” a London-based dealer said. To crown it all, the chairman of the European Central Bank Jean Claude Trichet stated Monday that the EU's economic development potential was close to the level of 2 percent, but not 2.5 percent as it was supposed before.

The fast rise of the US dollar occurred not only because of the negative news about the European economy: the dollar went up against the background of positive news about the American economy. The US currency started strengthening in the world after the publication of data about the September index of industrial activity in the USA (ISMManufacturing). “The index was expected to slide after the destructive hurricanes. However, it showed a considerable increase of up to 59.4 points vs. 53.6 points in July. It is noteworthy that the majority of market analysts were expecting a reduction to 52.0 points,” Elena Khrupova said.

High prices on fuel and the devastation caused by Hurricane Katrina have obviously exerted their negative influence on companies' activities. Specialists believe, though, that it is only a temporal phenomenon. The basic factors, which make the US industry move ahead and develop, are still stable. The unexpectedly registered economic growth also testifies to the fast recreation of the American economy after the two hurricanes, which obviously adds more optimism for the US currency, specialists say.

It is worthy of note that the US Federal Reserve System has been raising the pressure of inflation on the American economy, which also became another signal for the US dollar to rise. Inflation expectation indexes started growing in the USA in September. Furthermore, spokespeople for US financial departments announced the need to raise the discount rate, which directly affects the dollar rate. The more value the US money obtains, the more attractive US assets become. Investments in American assets, in the US dollar first and foremost, are expected to become more profitable, for the difference of US and European rates makes up 1.75 percent already. Specialists say that a further increase of the rate will give more opportunities for the US dollar to rise.