The stage is set in France for a fierce contest, between Segolene Royal and Nicolas Sarkozy in two weeks´ time, after they secured a place in the second round of the Presidential election at the expense of Francois Bayrou and Jean-Marie Le Pen. 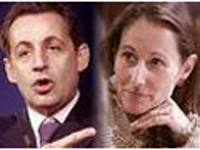 In the highest voter turnout in 25 years, the French people voted predictably for a left-right contest between two candidates who promise change and a resurgent France in the international community. Sarkozy promises to launch a policy of bold economic reforms, making a clear “rupture” with the past, while Segolene Royal promises a “fairer” society.

What do they represent?

Segolene Royal, the Socialist Party candidate, 53, has a 100-point plan, financed by an annual 2.5% rise in GDP, which includes raising the minimum salary to 1,500 Euro, increasing the state pension by 5% and linking unemployment benefit to 90% of the last salary for one year.

She promises to build 120,000 council homes a year and to introduce legislation for councils to seize properties left empty for two years. Her environmental policy aims to reduce the dependence on nuclear power, with 20% of the energy supply coming from renewable sources by 2020.

Standing for a consolidation of the 35-hour week, Segolene Royal promises not to raise taxation. Finally, she aims to take a tough stance on crime, sending young offenders to strictly-disciplined training camps. In foreign policy, Segolene Royal proposes to put a renegotiated EU Treaty to referendum and to set up a Eurozone government which promises to create economic growth inside uniform tax levels.

Nicolas Sarkozy, 52, leader of the centre-right UMP (l’Union pour un Mouvement Populaire), under the slogans “Together, everything is possible” and “Let us imagine the France after (the election)” aims to finance his proposals at the expense of civil service jobs.

He represents a flexible approach on retirement (staggered pensions depending on how many years of contributions a worker has made) and no tax or social security changes on overtime (after 35 hours).

Promising to eliminate homelessness within two years and to cut taxation by 4 percentage points., the ex-Interior Minister (who had used the word racaille , “scum” , to refer to juveline delinquents and who postulated on the genetic propensity of people to commit crime), aims to implement an immigration policy favouring qualified workers. In environmental issues, Sarkozy stands for nuclear energy as the main source.

As regards foreign policy, he favours the creation of a Mediterranean Union (Cyprus, France, Greece, Italy, Portugal, Spain), is opposed to Turkey joining the EU and promises to put a downsized EU Treaty to the French Parliament.

Born in Paris to a Hungarian father and a French mother, this lawyer became Mayor of Neuilly-sur-Seine (1983 – 2002). He was then appointed Minister of State for the Interior and Spatial Planning and briefly, Finance Minister in 2004.