Polish-oriented candidate chosen as the leader of Belarusian opposition 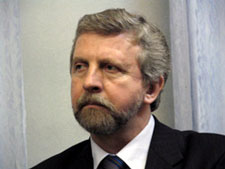 In Minsk the meeting of Belarusian opposition's congress took place. Its main task was to choose one and only candidate for the presidential elections 2006 who will be the real rival of Alexander Lukashenko. As a result 58-year-old professor from Grodno Alexander Milinkevich.

The opposition's gathering took place against another wave of EU and US statements, where Lukashenko was accused of violating human rights and was called a dictator. The latest resolution was adopted by the Europarliament on 29 September. It urges to forbid most of Belarusian officials entry to Europe and to freeze their accounts. Words are supported by actions. In fact, USA and EU have already allocated some dozens of millions of dollars on financing the opposition and on expansion of anti-Lukashenko TV and radio broadcasts, Belarusian office of the Radio Liberty in the first place.

One of the main tasks of both the opposition itself and its Western patrons became the quest for a single leader, “Belarusian Yushchenko”. Belarusian oppositionists held several meetings with the officials from the Western countries, including the Polish president Aleksander Kwasniewski  and the US secretary of state Condoleezza Rice. The United Civil Party leader Anatoly Lebedko was considered the favorite: he made statements on behalf of the opposition more often than the others. However, the delegates of the meeting take a different decision: professor Milinkevich received eight votes more. Other candidates – the leader of the Communists Sergey Kaliakin and ex-chairman of the Supreme Soviet Stanislav Shushkevich, who signed the declaration of the USSR dissolution – turned out to be the outsiders.

One of the main questions that worry Russia as well as the West is, of course, the opposition's view on the Belarusian-Russian relations. The question about the future collaborators of Belarus is answered by almost all of the oppositionists practically in the same way: “Straight into the EU together with Russia”.  Milinkevich said something similar: “Relations with Russia are very important for us. This is our strategic partner, with whom we’ve had ties for centuries”. At the same time he questioned the practicability of the political and military alliance with Russia. “Belarus should be a neutral country. That is what is written in the constitution and that's what the people want”, he concluded.

In the meantime, Belarusians understand that it is not possible to get into the EU with Russia because of the Europeans unwilling to treat Russia as a full-value part of Europe. That is why they will have to make a choice. One should try to guess what Milinkevich would choose. However, his choice can be deduced from his biography. His ancestors participated in the Polish rebellion of 1863. He is representing the Belarusian minority oriented at Poland. There is no use to remind of the Russian-Polish relations. It is worth reminding, though, that the Ukrainian constitution has also an article devoted to neutrality, which did not prevent Victor Yushchenko from expressing a wish to join NATO.

It should be stressed that the opposition's congress took place in Minsk, not in Warsaw, Vilnius or Kiev. This can mean that the president Lukashenko is self-confident and is able to beat any rival in the open struggle. He is also encouraged by the experience of the “orange” Ukraine, when the hasty attempts to join the EU led to nothing and the coolness in relations with Russia resulted in oil and sugar crisis. Besides, the West hoped that Lukashenko would forbid the oppositionists to meet in Minsk. However, they were surprised, to put it mildly.

Still, the West has its own plans concerning Belarus. A person oriented at Poland was chosen as the leader of the opposition not without purpose. According to the head of the Institute of Economics of the Russian Academy of Sciences, Ruslan Grindberg, Belarus has more chances to join the EU and NATO than Turkey or Ukraine. The country occupies a too important strategic position: oil and gas go through the country to Europe, it has a well-developed industry. Besides, Moscow is only 400 kilometers away from the Belarusian border.

Nevertheless, it turned out several times before that the Europeans are not always that pragmatic and do not always prioritize on money. Belarus has borders with three members of the EU – Poland, Lithuania and Latvia. It takes three hours of driving to get from Minsk to Vilnius (not taking the process of crossing the border into account). There is a large Catholic minority here (about one forth of the population) that almost completely oriented at Poland unlike Ukraine, where the majority of the population are not Catholics in the proper sense of the word but Greek Catholics, who always had tension with the Polish. Unlike in Turkey or Ukraine with its Crimean Tatars, the Muslim population is not significant here. As a result, the chances to join the European Union seem to belong to Belarus rather than to Turkey or Ukraine.

In fact, Belarus has two obstacles in the way to join the EU: objective and subjective.  The objective one means the Orthodox and is closely correlated with Russia. However, this seems to be simply dismissed, which is proved by choosing Milinkevich: the support of the loyal minority can be also used very well sometimes. It looks like the subjective obstacle is the only that is left. And that is Alexander Lukashenko.