The European Union is expected to make a decision pertaining to the imposition of sanctions against Uzbekistan. EU's ministers for foreign affairs are holding a meeting in Luxembourg, at which they are supposed to vote for the resolution to impose a weapon sales embargo against Uzbekistan, cut the volume of financial help to the former Soviet republic and bar Uzbek officials from visiting European states. 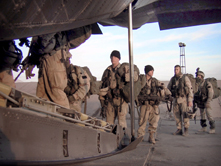 The imminent sanctions mark the continuation of tough measures, which are currently being taken against Uzbekistan on the US initiative. A draft resolution to file a criminal case against the incumbent President of Uzbekistan, Islam Karimov, was submitted to the US Congress on September 30. Legal proceedings against Karimov are to be instituted at the International Criminal Court. According to the document, the US administration intends to impose international sanctions against the Asian republic of Uzbekistan in general and against President Karimov in particular. The Committee for International Affairs of the Congress demands President George Bush use the US influence in the UN Security Council and to apply penalties against Islam Karimov in connection with a mass uprising in the town of Andijan that took place in May of the current year.

According to official information, 169 people died as a result of the mutiny in Andijan. Western observers and local human rights activists affirm, though, that the number of victims reaches 800 people.

Until recently, the Bush's administration insisted on the need to conduct an international investigation of the Andijan tragedy. An official spokesman for the US State Department, Sean McCormack, said that the USA was willing to render all adequate help to Uzbekistan. The administration of the former Soviet republic turned down the suggestion, though. In return, Washington decided to freeze the financial help of $22 million to Uzbekistan.

Observers say, however, that the USA has taken such a negative attitude towards Uzbekistan shortly after unsuccessful attempts to convince Uzbek President Karimov of the need to extend the term for the US army base to stay on the territory of Uzbekistan. To crown it all, the current trial of 15 men accused of May's unrest in Andijan, which currently takes place in Tashkent, added more fuel to the fire: it was said during the process that the US embassy in Uzbekistan had sponsored the mutiny.

Assistant Secretary of State for Europe Daniel Fried attempted to bring Islam Karimov to reason last week. Fried had to acknowledge later, though, that negotiations with the Uzbek president did not bring the desired result. Daniel Fried stated during a press conference in Tashkent, the Uzbek capital, that US troops were going to leave the territory of Uzbekistan without any additional talks on the matter. The US official said that Uzbekistan and the USA had experienced a rather complicated period of their relations, which was additionally aggravated with serious concerns of the US administration about human rights in Andijan. The US diplomat did not specify if the period was still going on or not.

Russia has thus remained the only reliable partner of Uzbekistan. “We approach the events in Uzbekistan as a tragedy, although our estimations of the basis of this tragedy are absolutely different from the opinion of Western organizations,” Russia's Defense Minister Sergei Ivanov said Friday. The minister added that Russia did not practice any restrictions regarding arms deliveries to Uzbekistan. “Our relations with Uzbekistan have been strengthening in all areas, including the defense field. There are no restrictions on arms deliveries to the republic, except for globally recognized international rules,” Ivanov told reporters.

It is worthy of note that the USA has imposed economic and other sanctions against a wide range of countries. Such measures are presumably instigated by foreign states' activities to violate the non-proliferation regime and human rights, support terrorism and conduct anti-American actions. The scale of sanctions differs in every particular case: there can be both universal and selective restrictions introduced. The USA imposed all-embracing sanctions against Cuba, for example, but barred weapon sales and other defense contracts with China. The USA imposed export trade sanctions (they are considered most comprehensive restrictions) with the following states: Cuba, Iran, Iraq, Libya, North Korea, Sudan, Serbia, Afghanistan and certain African states. The list is complete with China, India, Pakistan and Syria, with which the US administration practices restrictions on certain goods only.

Author`s name Olga Savka
18:54
Ukrainian soldier uses chainsaw and fire to release US howitzer from ice trap
18:30
Onet: Ukraine will lose in six months due to shell shortage
17:36
Russian troops defeat Ukrainian troops in Zaporizhzhia region
14:50
Number of foreign mercenaries in Ukraine continues growing
14:17
Russians buy more than 50 tons of gold in 2022
13:57
Russia will not talk to Ukraine. Russia will talk to the West
13:34
USA's plan to give 20 percent of Ukraine for peace hoax
12:51
Medvedev: Ukraine as a state to be devastated, go bankrupt and be turned into colony
19:57
Russia will use all of its military potential to counter Western arms supplies to Kyiv
17:36
Consequences of NATO's possible supplies of fighter jets to Ukraine get clear
The West prepares army to invade Russia