Kindhearted people in the United States and the rest of the world are still concerned about the relief effort aiming to help the residents of Louisiana, Mississippi, Alabama, and Texas who lost their homes and possessions due to the terrible hurricanes. Even low-income families share in. But there are quite a few black sheep in the family. Jackals disguised as human beings are keen to make fast money on tears and bereavement of those who were affected by the disaster. The department of homeland security is checking lots of reports as to fraudulent schemes and violations of the financing programs pertaining to the relief operation. 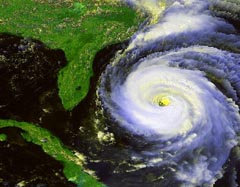 A few dozen inspectors and auditors were dispatched to the states affected by the disaster. They will mostly target the activities of the Federal Emergency Management Agency (FEMA) that has got the lion's share of financial aid provided by U.S. Congress to the Southerners. The total amount of aid is $62 billion. President Bush requested additional $50 billion, another treasure box corrupt bureaucrats will be laying their sweaty hands upon.

All kinds of swindlers are trying to get a hold on funds allocated to the victims of the disaster. And swindlers are well-equipped in terms of state-of-the-art fraudulence tools.

Above all, they use the Internet for building and running bogus websites ostensibly related to the relief effort. According to FBI, the number of websites claiming participation in the relief effort has reached 2,300 and still growing. FBI set up a center to combat the Internet cheats. The center is located in West Virginia. The first cases of fraudulence were registered on the Net a few hours following the September 11th attacks. The situation looked very similar after Hurricane Katrina swept across New Orleans. In most cases imposters were begging for help on behalf of the people affected by the disaster. Many tender-hearted people swallowed the bait and gave away their credit cards numbers. The swindlers were using the website that looked very much like the official website of the Red Cross. But the provider of the phony website was lurking somewhere in Brazil.

Robert Manigen, a 51-year-old resident of Florida, apparently followed the weather forecasts for the Gulf of Mexico with utmost attention. Even before Hurricane Katrina hit Louisiana, he launched several websites whose names contained the word “Katrina.” Shortly after the calamity became a reality, Mr. Manigen humbly asked the web users to “share with the unfortunate ones” and send donations to his websites. Using a little bit of technical magic, he channeled donations straight to his bank account. State authorities started a legal action against the swindler.

There were reports about another kind of Internet perpetrators who do not steal the money. Instead, they use it as a means for spreading racist propaganda. The website was capitalizing on the reputation of the Red Cross and Salvation Army. The crooks were requesting money from naive people without telling them that “their donations will be distributed only among those who belong to the white race.” The Attorney of the State of Missouri Jay Nixon has started a legal action against the website in order to shut it down. “We do not need a single penny from those racists,” said he.