Embattled World Bank President Paul Wolfowitz said Sunday he will continue to lead bank efforts to reduce global poverty, resisting calls to step down over his involvement in securing a huge pay increase for a close female friend. 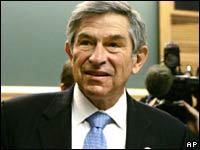 "The bank has important work to do and I will continue to do it," he said at a news conference winding up a meeting of the steering committee for the bank and the International Monetary Fund.

The committee said in its closing communique the Wolfowitz issue was "of great concern to us all" and called on the bank board looking into the matter to complete its work.

"We have to ensure that the bank can effectively carry out its mandate and maintain its credibility and reputation as well as the motivation of its staff," the committee said.

In answering questions from reporters about whether he should resign, Wolfowitz referred several times to the committee's communique and said he did not want any comments he made to get in the way of the board's work.

"I believe in the mission of this organization, I intend to carry it out, I have had many expressions of support," he said.

Several times he was asked how he could continue as head of the 185-nation lending organization leading the fight against corruption after acknowledging a direct role in the pay increase, Wolfowitz referred to the communique.

After the news conference, Alison Cave, head of the World Bank Staff Association, which represents 7,000 of the bank's Washington employees, said the group believes Wolfowitz should resign, the AP reports.

Wolfowitz apologized last week for granting the raise to Shaha Riza, an eight-year bank veteran who worked as a communications officer. To comply with bank regulations that forbid one partner to report to another, she was transferred to the State Department while remaining on the bank payroll.

The uproar was caused by the decision to give Riza a promotion and a 36 percent pay raise that was twice as large as staff rules allowed. The following year, she got a 7.5 percent raise, bringing her salary to $193,590, more than is earned by Secretary of State Condoleezza Rice.

“The whole business has damaged the bank and should never have happened,” U.K. International Development Secretary Hilary Benn told reporters in Washington on April 14.

The probe of Riza's promotion overshadowed the semi-annual meetings this weekend of the World Bank and the IMF. Every press conference was dominated by questions about Wolfowitz's future.

The bank's president by convention is nominated by the White House and is a U.S. citizen. The IMF's managing director, currently former Spanish Finance Minister Rodrigo de Rato, has always been a European.

Wolfowitz, a former political science professor who also worked for Presidents Ronald Reagan and George H.W. Bush as a diplomat and policy maker, came to the World Bank bearing the baggage of his role as an architect of the Iraq war.

His plan to beef up the bank's office in Baghdad and to speed lending there has opened him to charges that he is seeking to vindicate his war record. He is often heckled by anti-war protesters during trips around the U.S. and abroad, Bloomberg reports.

Sources close to the executive directors, speaking on the condition of anonymity while the matter remains undecided, said the board is reluctant to appear to cave to the staff and take the unprecedented step of firing a president. But a majority believes it would be "best if he decided on his own" to resign, one source said.

The board has "clear support from political authorities" -- the finance ministers who make up the bank's governing body -- "to go ahead and define whether a violation has taken place" and what the consequences should be, the source said. But the board has set no timetable for a decision. "For one thing, the United States has to find someone as a replacement. It's not something you decide overnight."

The U.S. president traditionally names the World Bank head. Bush said last week that he strongly supports Wolfowitz and expects him to continue in the job, washingtonpost.com reports.