Boris Berezovsky: Ukraine is not Russia

The Ukrainian leaders seem to be starting to realize that the situation in the country is really critical. The president's team looks utterly discouraged if not demoralized. Despite all his inadequacy, Viktor Yushchenko is one step away from realizing that he would be held responsible for all the unbecoming deeds he did. In actuality, he already has to pay for some peculiarities of his first eight months in office. 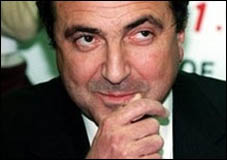 The political crisis in Ukraine never abated. Instead, it entered a new and more dangerous stage. Prior to a vote on a new Prime Minister in Parliament, Mr. Yushchenko spoke to the deputies. He finally had to admit that the Tymoshenko government had performed in a very bad way. He said that GDP rate slowed down by 2.32 times over the last eights months. In general, there was a 5-time decrease in GDP. Industrial production rate dropped 2.4 times, agricultural produce shrank by 1.7 times. The president also informed the deputies that Ukrainian entrepreneurs and businessmen were forced to pay “in advance” 6 million hryvnas (29.3% of all fiscal revenues) in the first half of the year. The amount of unpaid wages increased by 15%.

But now we are not talking about the political collapse, economic crisis breeding an avalanche. We are not talking about police investigation into allegations regarding corruption among the former members of the government or the president's team. Right now we are talking about one man who played a certain role in the orange revolution. Different people describe him in different manners. Some people still call him a “Russian businessman,” others call him an “oligarch in exile” or a “political refugee,” whereas some regard him “the Kremlin's former puppeteer.” We are talking about Boris Abramovich Berezovsky. His and his henchmen's activities are significantly reduced in Russia due to dramatic circumstances Mr. Berezovsky was part of while he was at the top. He was granted political asylum in Britain. However, his opportunities to show the best of his talents are apparently pretty limited in the West too. So Mr. Berezovsky has eyes for smaller countries of the former Soviet Union where he has interests. In the last few years Mr. Berezovsky has paid special attention to Ukraine.

The latest scandal in Ukraine involving Mr. Berezovsky broke out just recently. The Ukrainian participants are likely to take the consequences. The thing hit the fan after a web site posted the copies of payment instructions to the amount of $15 million. The money was reportedly wired from the accounts of companies owned by Mr. Berezovsky to the accounts of companies associated with the president's team. Mr. Berezovsky confirmed that the paperwork had been authentic and the money had been in fact transferred. True to style, Mr. Berezovsky could not help playing a trick on the media. He said a few words that intrigued everybody. Speaking to Vedomosti about the mysterious payments, Mr. Berezovsky said that he “will only comment on statements by Mr. Yushchenko and his senior assistant.” He refused to answer the question with regard to his participation in the financing of Mr. Yushchenko's election campaign. Meanwhile, he said that he had never donated any money to the former Prime Minister Yulia Tymoshchenko.

In his comment on the situation, Ukraine's new Secretary of State Yury Rybachuk plainly denied all allegations against the president who reportedly never heard about any bank transfers. “As far as I am concerned, Mr. Berezovsky's money was sent to the people's deputy Volkov and to Yulia Tymoshenko,” said he. In his interview to Rosbalt news agency, Chairman of Republican Party of Ukraine Yury Boiko said that “Mrs. Tymoshenko is a businesswoman with an iron grip on business matters so I am not sure at all that the money eventually reached the account for financing the Yushahenko campaign.” In the meantime, Mr. Yushchenko again denied any wrongdoing as to financing of his election activities. He said that money was coming strictly from the official fund.

Following the statements of the former presidential candidate and his team, Mr. Berezovsky spoke out. In his interview to Reuters, Mr. Berezovsky said that he had had several meetings with people closely associated with Mr. Yushchenko, he also said he had spoken with Mr. Yushchenko on the phone on numerous occasions. He sounded pretty disappointed speaking about Mr. Yushchenko's team whose members “are pretending to be completely unaware of me, as if they have never seen me before and had nothing to do with me in the past.”

It looks like a Ukrainian scandal with big potential for controversy simply can not happen without getting Mr. Berezovsky involved in it. In other words, Mr. Berezovsky seems to be an all-seeing, all-knowing and almighty creature looming on the Ukrainian horizon. Is he really as awesome as he seems to be? There are two options to choose from. First, Mr. Berezovsky is bluffing it out by saying that he is perfectly aware of the latest developments in Ukraine and knows the underwater currents and secret power tools of the Ukrainian politics. Second, he is really involved in what is going on in Ukraine. It is hard to say which of the two options would favor Ukraine at the most. Undoubtedly, Mr. Berezovsky has lots of plans with regard to Ukraine. As regards the latest scandal, he simply reminded the Ukrainian president of the popular saying that read 'he who pays the piper calls the tune.' His hopes are to take advantage of the political instability and do some fishing in the muddy waters. Unlike Mr. Yushchenko's team (the remainder of it), Mr. Berezovsky is not in a hurry. He is still able to give instructions for placing explosives and detonating them by remote control while the Ukrainian leaders are really at the end of their tether as they keep the boat afloat at the rough sea.