The Russian grandmaster Anatoly Karpov Monday played human chess with Diego Maradona as part of the TV show the Argentine soccer star hosts in Buenos Aires. The match ended in a draw, but Karpov played with his eyes covered by a black strip. 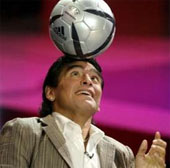 Maradona moved first to later ask Karpov for a draw. The chess World Champion between 1975 and 1985 accepted and the match concluded after both players had made only two moves.

“The king of chess gives this present to the king of soccer”, said Karpov, who also remembered that he had followed Maradona's matches during the Spain World Cup of 1982.

Maradona hosts the TV show called “The night of the 10,” which has turned into the most seen TV programme in Argentina. The former soccer player has recovered from a critical health condition that put his life at serious risk in April 2004.

Karpov is in Argentina to attend to the 2005 Chess World Cup that takes place in the Province of San Luis.