The current state of things resembles a stalemate situation

The voting in the German parliamentary elections is over. Contrary to all expectations, the distance between the oppositionist Christian Democratic Union with the ruling Social Democrats turned out to be purely symbolic. None of the parties managed to win the majority of seats in the Bundestag. Coalition parties such as Christian Democrats, Free Democrats, ruling Social Democrats and The Greens failed to obtain the majority of votes too. One may thus infer that the future political structure of the new German government is still unknown. 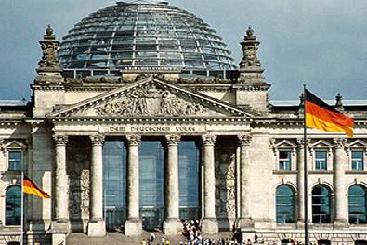 It is noteworthy that the German parliamentary elections use the mixed system in its process: 299 deputies are elected via the states lists using a proportional system of calculation, while the other 299 seats appear from election precincts. The Bundestag chamber counts 598 seats in total, although the number can be increased for a better presentation of political correlation. There will be 614 deputies in the new Bundestag, for instance. As a result, the Christian Democratic Union gained 225 seats, Social Democrats received 222 seats, Free Democrats take 61, The Greens enjoy 51 and the left Democratic Socialism Party has 54 seats. The voting in the final district, in the city of Dresden (in Germany's East), has been delayed until October 2: a neo-Nazi candidate is considered to be the central figure for voting there.

The current state of things resembles a stalemate situation: neither Social Democrats, nor conservatives will be able to set up a new government even in the coalition with their traditional partners from the Green party or Free Democrats. Both incumbent Chancellor Schroeder and Angela Merkel, the leader of the Christian Democratic Union (CDU), pronounced themselves the winners in the elections and said that they were ready to take the position of the German Chancellor. However, they both will have to seek allies in opposite camps. Germany's leading parties may establish a large coalition consisting of the Christian Democratic Union and the Social Democratic Party, although Schroeder and Merkel refuse to give up the chancellor's post to each other. Western Germany has already experienced such a situation in 1966, when a CDU candidate Kurt George Kiesinger became the German Chancellor, whereas Social Democrat Willy Brandt took the position of the Vice Chancellor and headed the Foreign Affairs Ministry of Germany. The coalition did not prove to be vital: Brandt became the absolute Chancellor of Germany in 1969.

Almost all German newspapers write regardless of their political sympathies that Germany fudged and would soon have to face a new stage of elections.  “War of the Chancellors. The part versus the future” the top-selling German daily Bild wrote in one of its recent headlines devoted to the current political chaos in Germany. A lot of journalists refer to the past experience of 1966-1969. Gerhard Schroeder, however, vehemently denies an opportunity to set up a grand coalition in the event Angela Merkel heads the conservatives.

It seemed a short while ago that the victory of the Christian Democratic Union, which won the majority of seats in the Bundestag chamber, would be the convincing end of the German parliamentary elections. The price and the unemployment levels are high in the country - there was every reason to criticize Schroeder's policy. Angela Merkel was criticizing Social Democrats and The Greens and suggested taking such social measures in home politics as to raise taxes to extricate from the crisis. As for foreign politics, Merkel believed Germany should become a USA's ally and even said that it would be possible for Germany to participate in the US-led war in Iraq. The Christian Democratic Union lost the previous elections four years ago because of such pro-American views. According to the results of an opinion poll conducted in Germany, 53 percent of respondents said that they would vote for Schroeder, if it were possible to elect the chancellor directly. Angela Merkel would receive only 40 percent of votes in this case. Merkel's East German origin plays an important role at this point too: Western Germans still distrust their country-fellows, who used to live in the German Democratic Republic.

Furthermore, the results explicitly demonstrated the growing political indifference that German people have. A lot of them were still uncertain about their choices as the voting day was drawing near. They simply did not see any difference between the conservatives and Social Democrats both in home and in foreign politics. Social Democrats are willing to reduce taxes and social allowances in Germany whereas the conservatives are ready to cut the social spending.

It is noteworthy that the Free Democrats and The Greens received smaller amounts of votes than they expected and thus failed to guarantee the majority of seats in the Bundestag to their senior partners from the CDU and the Social Democratic Party. The Party of Democratic Socialism, the reformed successor of Germany's old communists, received over eight percent of votes in the elections and overcame the five-percent limit. It is mainly connected with East Germans' disappointment in the political course of both the conservatives and Social Democrats. As a result, the Party of Democratic Socialism holds the key to forming the new government: if Gerhard Schroeder invites the left in his coalition, he will be able to remain the one and only Chancellor of Germany.