Imagine there's a UN out of the United States

The President of Venezuela, Hugo Chavez, said that the world body should move out of New York over the war in Iraq 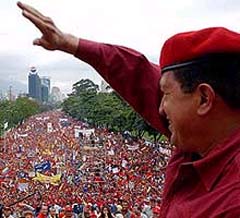 Venezuela's President Hugo Chavez said on Thursday that the United Nations should have moved out of New York after the United States launched the ungrounded attack on Iraq. In a speech to the U.N. world summit, he also said the United States had failed its own people in its response to Hurricane Katrina, accused Washington of fuelling terrorism and faulted it for its doctrine of pre-emptive military strikes.

"Today we know there were never weapons of mass destruction in Iraq but despite that, and going over the head of the United Nations, Iraq was bombed and occupied. So the United Nations must be pulled out of the United States," Chavez said. The Venezuelan leader also accused the Bush’s administration of being incapable of aiding the victims of hurricane Katrina. “There is no government in this country”, he said.

Chavez also slashed a US-backed plan for multilateral action in the new century on terrorism, human rights, development, peacebuilding and UN management reform.
Chavez branded the plan "illegal" for failing to respect anti-poverty goals set by a U.N. summit in 2000 and said the United Nations instead needed drastic overhaul.

"The United Nations has outlived its model. It's not just a question of bringing about reform. The 21st century requires profound changes," he said.

After rejecting written notices alerting that his time had expired, Chavez went ahead with his anti-Bush speech and remarked US double standards in its foreign policy. The Venezuelan leader noted bitterly that U.S. television evangelist Pat Robertson, a strong supporter of President George W. Bush who called for Washington to assassinate him, remained a free man.

"This is an international crime, terrorism," Chavez said, as noticed that Robertson is a frequent visitor in the White House. President Bush did not attend to Chavez speech.