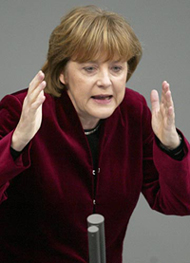 frequent question is whether the German foreign policy in the Eastern Europe will change in case CDU/CSU wins the elections. First and foremost, Germany will immediately start insisting on acknowledgement the fact of repressions. The repressive measures concerned Germans who were expelled after the World War II from the former Königsberg and also from some regions in Poland and Czech Republic. These countries may be demanded to pay compensation estimated at billions of euro to the expelled and their descendants. Besides, Germany may ask for their return to the previous places that will finally lead to reshaping of the European borders.

The history of this issue dates back to 1945. Back then according to the Potsdam Conference and the laws of different countries based on it millions of ethnic Germans were forced to leave Czech Republic, Poland, the would-be Kaliningrad region of the USSR and other parts of Europe for Austria or Germany. The grounds for this deportation were that these Germans had become the support for the Nazis and had contributed to the destruction of Polish and Czech federal status. On the whole, eight million people ended up in Germany and about half a million in Austria.

The majority of the expelled Germans were Sudetian (from Czech Republic), Silesian and Pomeranian (from Poland) – more than three million people in each case.

Hundreds of thousands were evacuated from the Eastern Prussia that became a part of the USSR. Many of them belonged to the Prussian aristocracy.

Conditions of evacuation were horrible. Sometimes people were only allowed to have five marks and no luggage. Sometimes they were forced to go on foot, sometimes they were taken away by trains and thrown out in the middle of nowhere because Germany and Austria were ruined by bombings (especially the part of Germany that would later become German Democratic Republic. Even the soviet military leaders who did not feel much compassion for the Germans wrote that their evacuation was not for the weak-nerved to watch. In comparison with Poland and Czech Republic, Germans' expel from Königsberg was more humane. All of them were placed into carriages where sanitary regulations were followed. Compared with the Nazis' brutality such measures really seemed more humane and they were not discussed on the international level.

However, this issue was discussed by the so-called landsman shafts, organization of expelled Germans in Germany and Austria. An Austrian organization of Sudetian Germans claims on its website, “The evacuation of the Sudetian Germans is connected with the desire of Czech authorities to create a monoethnic state and Stalin's need for chaos in Austria and Germany that would pave the way for the socialist revolution”.   Many of them did not reconcile themselves to the evacuation and the loss of property and have been waiting for the opportunity to claim their rights.

Paying certain attention to them, Christian Democrats refused to acknowledge the western border of Poland and Czech Republic until 1970 and 1973 respectively. In fact, they just formally acknowledged what had already been done by the chancellor from Social Democrats Willy Brandt. Finally, Germany was united in 1990, and the socialists collapsed. The representatives of CDU/CSU and the Austrian Popular Party got really interested in Poland and Czech Republic wanting to join the EU. They wanted to connect it somehow to the admitting the guilt before the expelled Germans. First of all, they wanted the laws prohibiting Germans to return and to get compensation for the lost property to be revoked. The EU expansion and the revocation of these laws were not linked together directly mostly because Social Democrats have been ruling in Germany for the last six years.

Nevertheless, the problem has not been put aside. German and Austrian mass media proves that saying that CDU/CSU agreed with the EU expansion exactly for pressing down on Poland, Czech republic and Russia. Throw in some of the initiatives by the German Christian Democrats, to found Ausweisung Museum (the museum of the exiled) in Berlin, for instance. Their suggestions include cresting a special euro region of the Eastern Prussia as a part of Russian Kaliningrad region.

Representatives of CDU/CSU demand official apologies for expelling the Germans from Czech republic and Poland. Although there were no direct territory claims, back in the beginning of the 1990s Helmut Kohl confirmed that the treaties on German-Polish and German-Czech borders were still valid. Such position of the German conservatives seems rather ambiguous. Such decision can mean an opportunity to put forward material claims and to claim right for return of millions of Germans. However, the majority of the politicians and population of Poland ad Czech Republic are not in favor of this position as they consider it threatening to the federal state, especially if taking into account that many of the expelled ones occupy high posts among Christian Democrats.

Their apprehension is proved by the history itself: in the end of 1930s the German minority played a great role in the disappearance of these countries from the map of Europe.

As the ex-ambassador of Russia in Germany, Igor Maksimychev, says, “CDU/CSU never supported territory claims that sometimes emerge among the expelled. But the fact that CDU is vigorous in supporting their interests is obvious. For example, in opening the Ausweisung Museum. It was a tragedy, of course. However, from the political point of view everything is clear: it was the Potsdam Conference decision. But when the political claims are concealed behind the compassion…It's all about politics and has nothing to do with the compassion. If the expelled Germans keep on telling how they suffered, it is one thing. But if the politics interferes, German relations not only with Russia but with Poland and Czech Republic as well will be questionable”.

Pained reaction has been a case in the former socialist countries for a long time. One of the main candidates for presidency in Poland Lech Kaczyńsky promised the CDU leader Angela Merkel that if the Ausweisung Museum opened in Berlin Warsaw would open the museum devoted to the brutality of Nazis. The Czech president Vaclav Klaus emphasizes that there are no reasons for apologies and compensation. That is why he and the former prime minister Miloš Zeman went to Moscow, Paris and London. Every visit to Russia, France or Great Britain he was reassured that the results of the WWII would not be reconsidered.

“The world is used to the situation when Germans make concessions or bear a large part of the expenses aimed at achieving common goals. Now Germany is an ordinary country among others with the same rights. After Germany had been reunited chancellor Kohl and the leaders of CDU felt like the winners. Angela Merkel displays the same attitude. Russia lost, and they began to identify communism with Nazism and Stalin with Hitler. They were saying Russia needed something like Nϋrnberg Tribunal”, Igor Maksimychev says about German eastern European policy.

In fact, Germany has really changed. It has become an international economic giant and is not going to stay a political midget. CDU/СSU will start claiming rights for the property and return of the expelled Germans. This can lead to the changes in the ethnic formation of the countries mentioned above. Then claims for autonomy and even absorption of neighbors may follow, although it is not stated directly. After that the map of Europe will be hard to recognize.

The scale of changes depends on the Christian Democrats themselves, who do not want to join the National Democratic Party of Germany, because they consider it neo-Nazi, and have reason. There is no unity in relation to this issue among CDU/CSU itself. Some of the politicians do not want to spoil relations with Poland and Czech Republic, thinking they would oppose Russia. Anyway, the issue of expelled Germans can be used any time for their convenience in order to make the eastern neighbors more obedient. Europe is facing the birth of the new superpower; and in case CDU/CSU wins the elections it will become more obvious, especially for the former socialist states.