Ukrainian President Viktor Yushchenko signed a decree to dissolve the parliament of the country (The Supreme Rada) yesterday and set the new election date on May 27. The deputies of the parliament and the government of Ukraine with Prime Minister Viktor Yanukovich at the head refused to execute Yushchenko’s order and considered it a non-constitutional decision. Yushchenko made a national speech on Monday night and urged the deputies not to aggravate the political situation in the country. 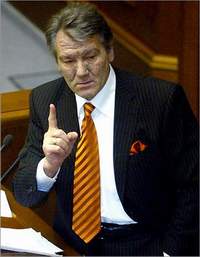 Yushchenko’s decree dissolving the parliament has not been published in any official newspapers of Ukraine. Such a publication is needed to bring the document into effect. Officials had to publish a special issue of the “Official Herald of the President of Ukraine” to legalize the decree about the parliament’s dissolution. Several deputies filed a lawsuit at the Constitutional Court of Ukraine in an attempt to find Yushchenko’s latest decision illegal.

In the meantime, the Central Election Committee of Ukraine is ready to conduct early parliamentary elections, the chairman of the committee, Yaroslav Davydovich said. However, the deputies withdrew the powers from Davydovich and deprived him of his position.

The political situation is Kiev is getting more and more intense. The followers of the feuding parts take to the streets, ready to support their leader.

who voted for parties, not separate deputies. Specialists believe that the coalition majority in the parliament of Ukraine minimize Yushchenko’s powers, which eventually made him start the fight.

The recent political events in Kiev made Viktor Yushchenko cancel his trip to Moscow, where he was going to participate in a session of a Russian-Ukrainian committee of presidential level. Yushchenko spoke with Putin on the phone and apologized for his inability to come to Moscow.