A group of radical Estonian nationalists attempted to lay a wreath of barbed wire to the monument of Soviet Warrior the Liberator in Tallin (the capital of Estonia). The slogan written on the ribbons attached to the wreath said: “To the murderer of the Estonian nation.” 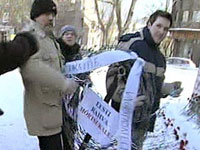 The defenders of the monument who were informed about the imminent provocation gathered near the Bronze Soldier in Tallin to express their own protest. They formed a live chain near the monument. The police later encircled the people to prevent a possible outbreak of violence.

The Estonian nationalists decided to conduct an action of sacrilege to mark the anniversary of the deportation of Estonians, which Soviet leader Joseph Stalin signed on March 25, 1949. Thousands of Estonian citizens were forced to leave their native land and move to remote regions of Russia and Siberia. Like many Soviet nationals, the Estonians were deported due to their affiliation to the class of prosperous people. A certain part of the Estonians was declared “enemies of the nation” and was expelled for their collaboration with Nazi Germany. The majority of them returned home during the second half of the 1950s, when the cult of Stalin ended.

In the meantime, the Estonian nationalists are planning another action to desecrate the memory of thousands of Soviet soldiers who fell in fierce battles against German fascists and liberated Estonia from Nazi regime. The action is to take place on May 9, the Victor Day, when WWII veterans and Russian-speaking residents of Tallin come to pay tribute to Soviet war heroes.

A leader of the Estonian nationalists, Yuri Liym, stated that no one would be able to distort the history of Estonia on May 9 2007: “There will be no red flags, no portraits of Stalin and no Stalinists near the Bronze Soldier monument,” said he. The V-Day celebrations in Estonia may thus be ruined.