UN speaks out against racial discrimination

21st March 1960. Sharpeville, South Africa. Police opened fire on a demonstration protesting against racial discrimination, murdering 69 people and wounding scores of others. On International Day for the Elimination of Racial Discrimination – March 21st – Ban Ki-Moon warns of a rise in racism, which undermines development goals. 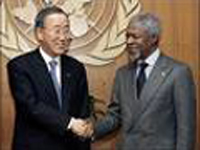 UN speaks out against racial discrimination

The UN Secretary General stated in his address on the International Day for the Elimination of Racism, that there has been a “disturbing rise” in incidents of racial discrimination in recent years, after decades of “significant strides” forward and warned that this development places a “formidable obstacle” in the way of national development.

Ban Ki-Moon considers that racist practices not only hurt individuals, but also harm societies, because individuals are prevented “from realizing their potential” and so cannot contribute fully to national progress. He added that racism perpetuates “deeply embedded social and economic inequalities” which “where unaddressed, ...can cause social unrest and conflict, undermining stability and economic growth.”

Mr. Ban Ki-Moon’s comments were delivered at this year’s observance, entitled “Racism and Discrimination – Obstacles to Development” at which he claimed the Millennium Development Goals are at risk, partly due to racial and ethnic discrimination. “Laws on the books haven’t always translated into improved conditions on the ground. And numerous countries have yet to formulate and implement effective anti-discrimination policies,” he said.

Moreover, Ban Ki-Moon warned that “Overall, recent reports point to a disturbing rise in incidents of racism, racial discrimination, xenophobia and related intolerance in many parts of the world,” adding that the United Nations has an important role to play in monitoring and implementing human rights.

Louise Arbour, UN High Commissioner for Human Rights, stated that societies which allow racial discrimination are holding themselves back, “foregoing the contribution of whole parts of its population, and potentially sowing the seeds of violent conflict.”