On Thursday, the press service of Polish PM Marek Bielka reported that he had 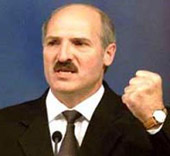 held talks with his colleagues from Latvia, Lithuania and Ukraine over collaboration in overthrow of the Belarusian president Alexander Lukashenko.

Lukashenko's overthrow has become the major question not only for the EU new members and states winning color revolutions, but the whole West. In April US Secretary of State Condoleezza Rice had a meeting with Belarusian opposionists in Vilnius. Georgian President Mikhail Saakashvili followed her at the summit of the so-called GUAM-group (this is Georgia, Ukraine, Azerbaijan and Moldavia) saying that “Belarus deserves a better fate”. In July the Europarliament adopted several resolutions condemning “Lukashenko's dictatorship” and encouraging not to spare money on struggle against him. The largest country of New Europe that used to possess Belarusian territories, that is Poland, should play the most important role in these measures.

Poland has already proved its determination to fight Lukashenko. Many Belarusian oppositionists, especially Russophobes from the Belarusian popular front, live in Poland. It is here that Belarusian opposition radio stations work, opposition newspapers and magazines are published and anti-Lukashenko rock-festivals are held. Besides, dozens of organizations with headquarters in Poland are busy with developing Belarusian democracy. The largest of them include Polish-American Freedom Foundation under former Polish Ambassador to the US Jerzy Koџmiсski, East European Democratic Centre and the Stefan Batory Foundation. The latter is researching the possible ways of development of Belarus after Lukashenko's overthrow and is financed by the State Department of the United States.

The need for Lukashenko's overthrow has been one of the main topics of Polish newspapers for a long time, but after Ukrainian Orange Revolution it has become an everyday subject of discussion. In his article “The world against Lukashenko” the journalist from Rzeczpospolita newspaper Jerzy Haszczyсski wrote: “It is not easy to fight dictators. It is also hard to make the satisfied society of the West react to persecution in the country, which they no little or nothing about. This weak point is used by Alexander Lukashenko”.

However, in all this flow of calls for overthrow of Lukashenko the real objects, which are purposed by Poland, become visible. “Polish government does not conceal its interest in overthrow of Lukashenko's regime. Love for democracy is just an excuse. The real goal is to kick Russia away from the Polish-Belarusian border. It does not matter whether the goal is chosen successfully and will become a reality in the nearest future”, Polish weekly Nie reports.

Poland that joined the EU a year ago decided to burden itself with the role of leader in Eastern Europe and to surround Russia with the countries under Polish influence. According to the Polish opinion, Belarus is the only missing link. All means are employed to subdue Belarus. It concerns half a million of ethnic Poles living in Belarus and Belarusian Catholics who are more or less Polish-oriented in the first place. A great number of the latter are Poles in fact, but during the Soviet period were registered as Belarusian on voluntary basis or by force. It is their Warsaw organization that is used as a trap to draw Russia away from Belarus by overthrowing Lukashenko.