The US President is expected in Montevideo, Uruguay, on Friday, as his Venezuelan foe will address a crowd in neighbour Buenos Aires. 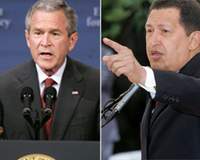 The Rio de la Plata separates Argentina from Uruguay in the South America’s southern cone. It is one of the widest rivers in the world, but a river at last. On Friday it will be more than a geographic barrier, as its shores will host two opposite visions about the future of the region.

The US President George W. Bush will arrive in the Uruguayan capital, Montevideo, on Friday to discuss trade issues with host leader Tabare Vazquez. At the same time, only 300 kilometers westwards, the leader of the self-proclaimed Venezuelan “Socialist Revolution” is expected to address a crowd of leftist militants in Buenos Aires.

Chavez, an outspoken critic of Washington, who likes to be introduced as the “Leader of Latin America” confirmed his trip to Argentina two weeks ago, during a visit to Venezuela of his Argentine counterpart, Nestor Kirchner. The Argentine government is active in organizing the rally with leftist militants in an attempt to show some autonomy from Washington after Buenos Aires backed a US sponsored case against Iran.

Bush leaves on Thursday for Brazil, first stop on the six-day tour that will include visits to Uruguay, Colombia, Guatemala and Mexico. He takes a softer message aimed at improving his reputation and bolstering U.S. influence in a region where anti-American voices like Chavez are rising.

Bush carefully avoided mentioning the fiery Venezuelan leader's name, particularly when asked about Chavez's plans to hold a protest rally in Argentina while he is in neighboring Uruguay.

"My attitude is, I love freedom and the right for people to express themselves," Bush said. "I bring a message of goodwill to Uruguay and to the region. My trip is one that says, let's find ways to work together for the common good."

Bush will go down to Latin America to push free trade and open markets, in an attempt to curb the development model championed by Chavez that calls for nationalization of industry and greater government intervention.

"I fully recognize that until people actually feel progress in their pocketbook that there's going to be frustrations with forms of government. But that doesn't mean you kind of revert to something that I don't believe will work," he said.

Chavez is expected to make use of his flourished rhetoric to counterattack Bush’s visit, as considers Latin America his territory. In a recent add published in Venezuelan newspapers to attract audience to his recently launched daily radio show, Chavez invites people to listen to the “Leader of Latin America” alive.

In Buenos Aires, Chavez will speak loud to balance the presence of Bush and his meassage for Latin America.