Chavez arrests former general on alleged plot to overthrow him

The leftist leader has repeatedly warned that there was an ongoing plan to topple his government. 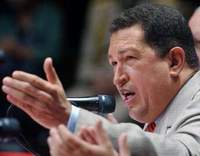 Chavez arrests former general on alleged plot to overthrow him

A retired National Guard general and his son were arrested by Venezuelan authorities on Wednesday on accusations that they were plotting to overthrow President Hugo Chavez. The arrests come shortly after Mr Chavez reiterated denounces that Washington was behind a plan to topple him in association with local opponents and anti-Castro Cuban militants.

Agents from Venezuela's Military Intelligence Directorate arrested Gen. Ramon Guillen Davila on Tuesday on allegations of "promoting a military rebellion to oust the president," Gen. Guillen Davila’s attorney denied that his client was involved in a purported plot to oust Chavez, but said the retired general "is opposed to the communist regime in Venezuela because it violates democratic principles."

During a televised interview Sunday, Chavez said Venezuela has intelligence that associates of jailed Cuban anti-communist militant Luis Posada Carriles are involved in plotting his assassination. Chavez did not give details regarding the purported plot involving Posada, a former CIA operative who faces immigration charges in El Paso, Texas, and is in the custody of the U.S. Marshals Service.

To detect any assassination plot, Chavez said he has ordered top security officials to begin "an offensive because we have been on the defensive on that issue." Without elaborating, he added: "It is possible that surprises could soon occur.

On Tuesday, an emission of the public TV network, Venezolana de Television, had aired a recorded phone conversation about a plan to kill Chavez. The contents of that program were later reproduced by the official news agency ABN. According to both sources, the alleged plot involves many other Venezuelan officers.

On Sunday, former vice-President Jose Vicente Rangel had denounced a plot to kill Chavez. According to Mr. Rangel the CIA and the Colombian intelligence services were involved.