Conservative President Alvaro Uribe accepted the offer, and promised to release an open letter against abortion

The conservative administration of President Alvaro Uribe finally accepted an offer from the local Roman Catholic Church to mediate with leftist rebels in an attempt to bring both sides back to talks and put an end to the four-decade-old guerrilla conflict. Government's acceptance comes after the local Church asked hard-liner Alvaro Uribe to find a “negotiated solution to the armed conflict” and to drop his “bellicose approach” to the issue since became President three years ago. 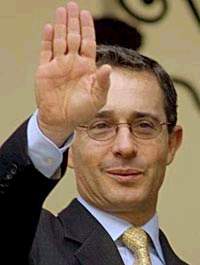 According to reports from country's capital, Bogota, Uribe said he had accepted the offer to set up preliminary talks with both Marxist armies about conditions for possible cease-fires. However, the hard-liner President said that talks would only begin once cease-fires are declared.

In what some analysts consider a new beginning of the relations between the government and the Church, Uribe also promised to make public a letter he had already sent to the Congress stating his firm position against abortion. The move has been seen with sympathy by the Catholic clergy, which tries to block initiatives to legalize abortion in this South American country.

"The government accepts the church's efforts for a preliminary dialogue towards a cease-fire," Uribe told reporters after meeting the church's most senior figure in Colombia, Monsignor Luis Augusto Castro, who made the offer over the weekend. Until now the government had insisted the Revolutionary Armed Forces of Colombia, the largest rebel army that is known by its Spanish initials FARC, declare a cease-fire before any talks at all.

According to the offer made by the Church, the preliminary dialogue would take place in a country outside Colombia without previous conditions. The main goal of the preliminary talks would be to obtain a cease-fire, which would bring both sides back to negotiations table.

The local Church believes conditions for peace exists since rebel groups have apologized for the assassination of two priests in the region of Santander, on August 15. The Church and the government accepted the apologizes but, as Uribe asks for an unilateral rebels cease-fire, the Church admits that such an imposition do not create the conditions for a fair negotiation.