While the USA exports freedom in the countries of the Commonwealth of Independent States (CIS), its neighbors create the center of active resistance near US coasts. Venezuelan President Hugo Chavez, the key irritant in the Western hemisphere, arrived in Cuba to meet the unsinkable Fidel Castro. The two leaders appeared together on the air of the Cuban television and declared the American imperialism the prime danger to the whole world. It became their response to the US Defense Secretary, who previously stated that the Cuban and the Venezuelan regimes jeopardized the stability in the Western hemisphere. 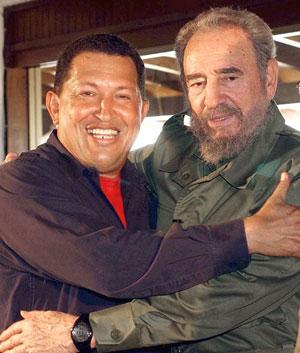 Another stage of the conflict between the USA on the one hand and Cuba and Venezuela on the other hand started last week, when Donald Rumsfeld visited Paraguay and Peru. The head of the Pentagon affirmed that Cuba and Venezuela were going to spread revolutionary sentiments in Latin America, pushing South American states towards a wrong direction in their development. Deputy Assistant Secretary of Defense for Western Hemisphere, Roger Pardo-Maurer, specified Rumsfeld's remarks and said that Chavez and Castro were working on a revolution in Bolivia. Supposedly, the revolution is to sweep across the entire region, and Marxists are to come to power as a result of it.

Spokespeople for the Venezuelan government originally explained the activity of US officials with Washington's suggestion to establish a free trade zone in Central America, CAFTA. Hugo Chavez characterized the initiative as the continuation of the imperialistic and neocolonial policy of the States. CAFTA's fate is supposed to be determined this week when six largest Latin American states vote for it. It is noteworthy that Chavez's current visit to Cuba has become the fifth during the recent nine months.

In Havana, Chavez enjoyed a huge diplomatic victory, which would let the Venezuelan president obtain stronger reputation of a leading politician in Latin America. Fidel Castro and the President of Panama, Martin Torrijos, signed a decree about the resumption of diplomatic relations, which Panama ceased over 40 years ago on account of the USA's pressure. The news report about it was followed with a televised show of Castro and Chavez, in which the latter exercised remarkable oratorical abilities.

In his speech Chavez described his attitude to Fidel Castro and Cuba: “People have asked me how I can support Fidel if he's a dictator," Castro said. "But Cuba doesn't have a dictatorship - it's a revolutionary democracy." After that the Venezuelan leader cracked down on the USA: “The grand destroyer of the world, and the greatest threat ... is represented by U.S. imperialism," Chavez said. "If the world continues on the road being imposed by imperialism, the world will head straight for destruction." Castro and Chavez were receiving phone calls from other states during the TV and radio broadcast of their speech. The President of Nicaragua and the leader of local revolution, Daniel Ortega, was one of the people, who called the two leaders. Ortega emotionally praised Castro and Chavez for their policies.

It is noteworthy that Hugo Chavez backed his statements with quite concrete actions. The president of Venezuela threatened to cease deliveries of oil to the USA and tried to smooth out the aggressive tune of his previous statements. Chavez said that he did not want to break relations with the US administration. However, the president added, the growing aggression of US authorities may endanger relations between the two states. “Two tankers filled with Venezuelan oil, which arrive in the USA every day, may travel in a different direction,” said he.

On June 30, members of the Energy summit of governments and states of the Caribbean region, save Trinidad, Tobago and Barbados, supported Venezuela's suggestion to set up the US-independent oil company, Petrocaribe, with the participation of Latin American state capitals. According to Chavez, it would give an opportunity to set fair oil prices, which would be different from the current level of world prices, which burden the economies of underdeveloped countries.

The USA, which definitely tries to guarantee deliveries of cheap oil from the Caribbean region, is prepared to discredit Hugo Chavez at all costs. The US administration feels that a new leader has appeared to replace the aging Fidel Castro. In addition, the new leader heads the state, from which the USA acquires 13 percent of its overall oil consumption. However, other states of the region do not welcome the wish of the US administration. Lula da Silva, the President of Brazil, ascertained during the talks with US Secretary of State Condoleezza Rice that Chavez could count on Brazil in their solidarity. Fidel Castro, who obviously paid attention to the growing authority and popularity of the Venezuelan president, said on May 1 that Cuba was invulnerable from the military point of view. Castro said that Cuba would be able to withstand the possible US aggression and cause huge damage to the aggressor, which could only be comparable to the war in Vietnam.

Venezuela's significance pales in comparison with the leading states of Latin America, Brazil, Mexico and Argentina – their economic potential and up-to-date industrial development. If Chavez and Castro do not go too far with their bellicose public speeches, the USA will have to face a union of Latin states, which would not be willing dance to the USA's tune.

In the meantime, an American religious preacher, the founder of the Christian Coalition organization, a former presidential candidate, Pat Robertson, has called upon the United States to assassinate the President of Venezuela, Hugo Chavez. Robertson called Chaves “a terrific danger” for the USA. "If he thinks we're trying to assassinate him, I think that we really ought to go ahead and do it. It's a whole lot cheaper than starting a war,” AP quoted Robertson as saying. Robertson told viewers of his "The 700 Club" show that the USA should take efforts not to let Hugo Chavez turn Venezuela into a "launching pad for communist infiltration and Muslim extremism…I don't think any oil shipments will stop,” said Robertson.

On the photo: Presidents Hugo Chavez and Fidel Castro