Japan's Cabinet on Friday approved sanctions against Iran over its nuclear program under U.N. Security Council guidelines, increasing international pressure on the Islamic country for refusing to suspend uranium enrichment. 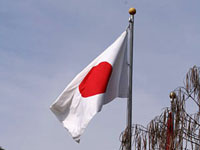 The measures, approved by the council last month, include a ban on supplying Iran with materials and technology that could contribute to its nuclear and missile programs, according to a government statement issued Friday. It also bans the transfer of funds without government permission to 10 Iranian companies and 12 individuals related to those programs.

"It is necessary to take a firm response in consideration of the maintenance of the nonproliferation regime," Chief Cabinet Secretary Yasuhisa Shiozaki told reporters.

The council started debating the draft after Tehran refused to comply with an Aug. 31 council deadline to stop enrichment, which can lead to production of nuclear weapons, the AP reports.

Gregory Schulte, the U.S. ambassador to the International Atomic Energy Agency, said on February 7 that if Iran continues to defy U.N. Security Council demands that it halt enrichment the council "must stand ready to consider additional measures" after receiving an IAEA report on Feb 21.

U.S. and European officials said the administration initially underestimated the U.N. resolution but now believes it has had an important impact by fuelling debate in Iran over how to deal with the West.

IAEA Executive Director Mohammed ElBaradei is due to report on February 21 on Iran's compliance with the U.N. demands. Instead of halting enrichment, as the U.N. has demanded, the Islamic republic has taken steps to move from research to full-scale enrichment, upping the stakes in a stand-off with the West.

Russia, the main opponent to the first sanctions resolution, is expected to once again seek to thwart or weaken a second resolution, but U.S. officials have said Iran's push to full-scale enrichment could cause Moscow to rethink its stance, Reuters reports.

Iran's President Mahmoud Ahmadinejad said on Feb. 11 that the country won't start negotiations about its nuclear program until conditions for talks imposed by the UN are lifted.

U.S. President George W. Bush accuses Iran of trying to develop nuclear weapons and of interfering in Iraq. Iran denies both accusations and says the aim of its program is to make enriched uranium to fuel power stations, Bloomberg reports.