The crisis in Lebanon is rapidly accumulating the potential to plunge the country in a second civil war, while Israel is closely watching on the sidelines for the right moment to exploit the ensuing security vulnerability and finish the Lebanese divide off by intervening militarily to conclude what it officially describes as the “inconclusive” war last summer. Meanwhile, the most influential external potential mediators, regional and international, are more or less part of the crisis than they are part of the solution and pre-empting possible mediation efforts. 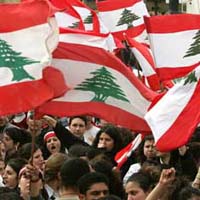 The dead end which the crisis has reached is paralyzing Lebanon politically and economically, revealing the “country's deeply flawed institutions and the flimsy constitutional processes that … have proven woefully inadequate … to keep them functioning in times of crisis” where “no mechanism exists that might end it in an orderly fashion,” and the crisis is testing the limits of the “Lebanese version of the democratic process,” pushing its institutions “beyond their breaking points,” according to the editorial of Lebanon’s The Daily Star on January 24, leaving to external mediation the mission of defusing the crisis.

Historically the only external moderating influence that is qualified for a credible mediation role is that of Saudi Arabia, who is a major aid contributor to Lebanon and who mediated the Taif agreement, which extinguished the fires of the first Lebanese civil war. However this potential Saudi mediation is constrained by the conflicting interests of Riyadh’s Syrian and U.S. allies, and unless Riyadh could neutralize the U.S. contributing factor to the Lebanese crisis as a pre-condition to neutralize the Syrian influence, her mediation efforts could not take off in Lebanon.

Mediation efforts by the Arab League, have so far failed to break through the crisis. Several major internal and external interacting factors have doomed these efforts. The Israeli-backed U.S. and French siding with one Lebanese party against the other for reasons that have nothing to do with the country’s interests is exacerbating the dangerous divide; it is unfortunately welcomed by a receptive attitude from Lebanese parties who historically used to resort especially to western powers either to settle scores internally with political foes or to redress an imbalanced internal realignment of the 18 sectarian ingredients of the political system that was left over by the French mandate in 1943.

The U.S. and French factors are thus excluded as possible mediators in the crisis, and have turned in practice into obstacles blocking possible United Nations and European involvement.

The Israeli factor is the major raison d’etre for the Syrian defensive influence in Lebanon. Syria’s national security cannot tolerate a military threat from Lebanon, be it Israeli, French or American , some thirty kilometers away from the country’s heartland while at the same time the Israeli Occupation Forces (IOF) in the Syrian Golan Heights are only some thirty kilometers from the capital Damascus. The occupation of Syria’s eastern neighbor, Iraq, by Israel’s U.S. strategic ally has had the Syrian decision-makers on the edge.

Israel and its U.S. ally are provokingly ringing more alarming bells to alert the Syrian defensive instincts and at the same time adding fuel to the Lebanese crisis. President George W. Bush in his last “state of the union” speech singled out Lebanon as one of the major arenas in the Middle East where “nothing is more important at this moment in our history than for America to succeed.” He proclaimed an agenda there that puts Washington on a collision course with Damascus .

Aligning his country with the current government of the “Cedar Revolution,” the one party in the Lebanese crisis that “drove out the Syrian occupiers,” against the “ Hezbollah terrorists” - led opposition, Bush practically pledged to continue meddling in Lebanon’s internal affairs by taking sidesin thecrisis, thus pre-empting allmediation efforts and promising to perpetuate the crisis that is paralyzing the presidency, government and parliament and eroding the infrastructure of the Lebanese state.

It was sarcastically ironical for Bush to describe the Syrians as “occupiers,” a word that he has so far missed to learn or utter in reference to his country’s four-year old occupation of Iraq or to the 40-year old Israeli occupation of the Syrian, Palestinian and Lebanese Arab territories.

Hence the Israeli-U.S. coordinated intervention in Lebanon is antagonizing the Syrian influential role in the country, which historically has been decisive in making or breaking Lebanese crises.

In a rare U.S.-Syrian convergence of interests Damascus intervened militarily in Lebanon in the seventies of the twentieth century, which stabilized the country. Unfortunately this stabilizing convergence of interests was abruptly interrupted by the U.S.-backed Israeli occupation in 1982, which ironically led to the ousting of the Palestine Liberation Organization (PLO) - - Israel’s declared pretext for its invasion -- but led to the emergence of Hezbollah as a legitimate Syrian-backed Lebanese resistance to the occupation that lasted until 2000, when it was driven out unconditionally 18 years after the PLO left the country. Hezbollah, a party that might not have been born were it not for the Israeli occupation itself, has become Israel’s new pretext to pursue its expansionist policy in Lebanon.

The Israeli occupation, the ensuing Syrian alarm and the emergence of the Hezbollah-led Lebanese resistance were Iran’s gateway into Lebanon. Iran’s negative and passive performance in Iraq vis-à-vis the American occupation and the Iranian convergence of interests with this occupation vis-à-vis the Iraqi national resistance, dubbed by both as “terrorist,” explicitly indicates the Iranian role in Lebanon as having more to do with regional plans than with credible solidarity with the Lebanese resistance.

The recent statements of Hezbollah leader, Hasan Nassrallah -- who publicly opposed the stances of Iran’s ruling allies in Iraq vis-à-vis the U.S. occupation, the U.S.-led “political process,” the “multi-national forces,” which he condemned as the occupation forces, and the Iraqi resistance -- were informative indications of the Iranian role. Moreover the survival of both Syria and Hezbollah make them more closely interrelated than their separate interrelation with Iran, as both are targeted by the two U.S.-French drafted United Nations’ Security Council resolutions 1559 and 1701. Washington has designated Syria a terror-sponsoring nation because of its support for Hezbollah.

Another informative development was Tehran’s approach to Riyadh to coordinate a joint effort to defuse the Lebanese crisis. Despite the U.S.-Israeli condemnation of Iran as a spoiling intruder into Lebanon together with Syria, Tehran chose to pose as a possible mediator rather than a foreign partner to the crisis, obviously distancing itself from Damascus. However the Iranian top national security official Ali Larijani visited the Syrian capital recently to coordinate jointly the new Iranian-Saudi mediation. He then held talks twice within ten days with the Saudi officials. Iran’s foreign minister, Manuchehr Mottaki, also held telephone talks with his Saudi counterpart Prince Saud Al-Faisal.

The donors’ factor is not promising to do much better. Pouring billions of foreign aid into Lebanon’s treasury would not buy the Lebanese peace and unity, because the donor’s’ role is initiated to play into the hands of foreign as well internal partners to the conflict and as an integral part of reinforcing one party against the other. Most Lebanese and non-Lebanese experts and observers fear the donors will squander their taxpayers’ money unless their donations are channeled through Lebanese national consensus and a national unity government. The incumbent government is too embroiled in the national crisis and may be too paralyzed tofully dealwithreconstructioneven if the money comes in.

More than $2 billion already in Lebanon’s treasury, mostly paid by Saudi Arabia and Kuwait following the Israeli invasion last summer, neither alleviated the economic duress of Lebanese nor rebuilt some 119,000 houses which were home for more than 200.000 Lebanese made homeless by the Israeli bombardment.

Moreover, the economic deteriorating situation has been a major factor contributing to the crisis. The Lebanese national debt is now reportedly an astounding $40-60 billion, making Lebanon one of the highest debt-GDP ratios in the world, with each family now indebted to the tune of $75,000. Last Thursday, 35 donor nations pledged in Paris more than $7 billion in aid and loans to help rebuild Lebanon. The loan portion of the pledges is viewed with skepticism as an economic mechanism to hold Lebanon a political hostage to the U.S.-led western strategic agenda in the Middle East.

The status quo in Lebanon is also threatening to disintegrate its national security system. The national army and the security forces are preoccupied with the mission of preserving their neutral unity, which in any time now could prove impossible amid a snowballing national divide. “True the army is suffering from pressure … The army has been bearing above its load for months,” the commander General Michel Suleiman told As-Safir newspaper. At the same time Hezbollah, the backbone of the national defense against the Israeli looming threat, is preoccupied with a national-political crisis that is driving the country into the brink of a second civil war. Both parties to the crisis are becoming more vulnerable and less immune to resist the external factors and their internal extensions, which are pushing the divide towards its inevitable conclusion.

The crisis is creating the exemplary environment for a successful Israeli military intervention. On January 23 The Associated Press reported an Israeli military drill the previous day on a mock Arab city in the Negev desert complete with mosques, apartment buildings, even a faux Palestinian refugee camp, built on eight square miles with the help of the U.S. Army Corps of Engineers. The AP quoted a veteran of the war on Lebanon, Sgt. Shalev Nachum: “We're definitely training for the next war. Next time, it willbe different.” The $40 million Urban Training Center was unveiled to coincide with naming a new Israeli army chief of staff, Gabi Ashkenazi.

Ashkenazi is a veteran of Israeli wars on Lebanon, commanded major operations in the invasion of 1982 and oversaw the eventual withdrawal of all Israeli occupying forces from south Lebanon in 2000; he replaced Dan Halutz, who resigned after criticism of his handling of the war on Lebanon last summer. Ashkenazi’s “mission,” according to AP, is to “restore Israel's deterrent posture and public confidence, both dented by last year's costly and inconclusive Lebanon war.” Israeli Prime Minister Ehud Olmert and “Defense” Minister Amir Peretz “expressed confidence in Ashkenazi's ability to … implement the lessons from the war in Lebanon,” said a government statement announcing his appointment.

Israel is wasting no time to redress what she considers the 2006 “inconclusive war” on Lebanon. The determination of all the Lebanese parties to the crisis to emerge winners in a divide that if continued will only condemn all of them as losers is a determination to make the Israeli “mission” much easier. Their national consensus on national unity as the only way of survival is also the only background on which potential mediation efforts could take off to neutralize the adverse external factors, avert a civil war and at least make the price of a new Israeli military adventure too high to have a “decisive” instead of an “inconclusive” conclusion.

Nicola Nasser is a veteran Arab journalist based in Ramallah, West Bank of the Israeli-occupied Palestinian territories.