Another monstrous terrorist act took place in the center of Baghdad yesterday. Two powerful explosions killed at least 88 people and injured 160. The bombs detonated at Bab al-Sharqi market in the Shiite part of the Iraqi capital. The first bomb placed in a car exploded near a row of vendors selling DVDs and secondhand clothes. The second explosion followed almost instantly. The number of victims may continue to grow as many of the wounded were hospitalized in severe condition. 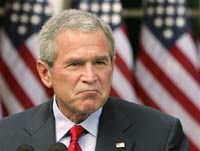 The new outburst of violence in Iraq has become the bloody background for the arrival of extra US troops in the war-torn country. More than 3,000 US soldiers and officers have recently arrived in Iraq according to the new war strategy of US President George W. Bush. The servicemen will be deployed at the center of the Sunni resistance in Iraq – Anbar province. The US administration plans to dispatch 21,500 military men to Iran in total.

Twenty-five US soldiers have been killed in Iraq since Saturday, including 13 military men who were flying on board a Black Hawk helicopter that was downed by a missile fired from an anti-aircraft complex located in the north-east of Baghdad. USA’s death toll in Iraq now counts over 3,000 lives.

Dem. Senator Edward Kennedy described Bush’s new Iraq strategy as “an immense new mistake.” The senator believes that the current US-led policies in Iraq bear a striking resemblance to the war in Vietnam. The USA believed back then that another extra effort would take them to victory.

However, George W. Bush prefers not to comment on a possible date when US could withdraw its troops from Iraq. “We don't set timetables in this administration because an enemy will adjust their tactics based upon perceived action by the United States," Bush told the USA Today newspaper. When asked if Iraq was going to be a big problem for his successor in 2008, Bush said: “This will be a long struggle.”

The USA president firmly attempts to defend his Iraq strategy that drew international criticism. This will be the key issue in his State of the Union address to the nation at the Congress today. It goes without saying that Bush will have to take a lot of effort to explain his views on the new Iraq strategy to Democrats.