Russia's Ministry for Defense outlaws ABC News, while Russian reporters are working on an interview with Osama bin Laden

USA's TV channel ABC, which has recently aired the interview with the leader of Chechen terrorists, Shamil Basayev, has been deprived of accreditation at the Russian Ministry for Defense. The information on the above was received from the Defense Minister of Russia, Sergei Ivanov. “This American channel is persona non-grata for the Defense Ministry. There will not be any interviews given to its journalists ever,” the minister emphasized. “There can be one simple word found to express our feelings on the matter – indignation,” Sergei Ivanov added. 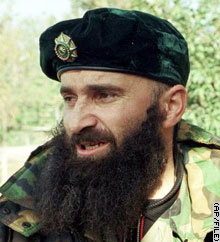 The minister also said that he had already ordered the chairman of the Defense Ministry's press service to forbid all Russian military men to have any contacts with ABC.

ABC News aired the interview with Shamil Basayev on July 29th. The terrorist leader was trying to deny responsibility for the death of hundreds of innocent children in the hostage crisis in Beslan.

Russian politicians harshly criticized ABC's decision to broadcast the notorious interview. Officials raised the question of double standards of the Western society again. Spokespeople for the Foreign Affair Ministry of Russia said that the actions of American journalists were “outrageous.” It was particularly pointed out that the interview with Basayev was aired after brutal terrorist acts in London and Egypt.

It is noteworthy that the US State Department treated the standpoint of the Russian Ministry for Foreign Affairs with understanding. A statement from the US State Department said that Shamil Basayev was an international terrorist, who would be arrested immediately in the event he appeared on the US territory. Diplomats also said that they had repeatedly informed American journalists not to give tribune to terrorists, for the latter may use an opportunity and distribute secret instructions through television.

An official spokesman for the US State Department said that American authorities condemned all terrorist acts, but could not deprive a TV company of its constitutional right to air this or that interview. The White House urged American television companies to restrict the distribution of video recordings with terrorist No.1 Osama bin Laden before. Journalists, however, are left to make final decisions on the matter, American authorities believe.

In the meantime, as long as the USA airs interviews with Shamil Basayev, Russia is preparing an interview with Osama bin Laden. Journalists of the Komsomolskaya Pravda newspaper said that Al-Qaeda's head promised to answer all questions to Russian reporters. For the time being it is not known, when the interview with Bin Laden is going to be published in Russia.