Telesur, the Latin American television network created to counter the "hegemony" of international networks, hit the airwaves for the first time Sunday and sparked a hot debate as Washington is prepared to counter-attack if its messages are “anti-American.” The new TV station based in Caracas and created by the governments of Venezuela, Uruguay, Cuba and Argentina, broadcasts 4 hours a day and it is expected to cover the 24 hours of transmission in a few months. 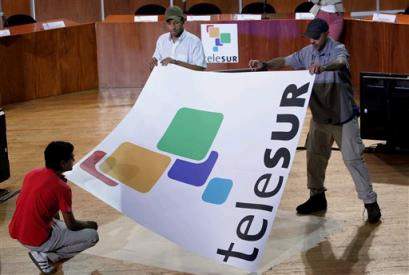 “Telesur depends on no government, no line, it is free to pave the way toward integration," said Chavez, who sees the network as a means to foster regional unity in Latin America and the Caribbean. With 160 employees, Telesur will have correspondents in nine countries (Venezuela, Cuba, Argentina, Brazil, Bolivia, Colombia, Mexico and the United States) and will carry images from state and academic-related television stations across the region.

The company is capitalized with 10 million dollars, and is 51 percent controlled by Venezuela, 20 percent Argentina, 19 percent Cuba and 10 percent Uruguay.

However, the US Congress does not trust Chavez's remarks and approved last week a measure to transmit radio and television broadcasts to Venezuela to ensure citizens receive “accurate news.” The U.S. congressional measure is aimed at responding "only if the messages of Telesur are anti-American" - and without "violating" Venezuelan airwaves, commented a US MP's.

Sources that attended to the inauguration of Telesur's transmissions, told Pravda.Ru in Buenos Aires, that the “preventive” US communicational attack was ungrounded as “Telesur is not meant to be an anti-US network.” However, the source admitted that some advisors aimed to turn the TV Station into a propaganda agency, but that approach “was easily defeated by the great majority of the advisory board.”

“Telesur aims to be a tool for the integration of all Latin American cultures, respecting the rich diversity of the region”, told PRAVDA.Ru Tristan Bauer, an Argentine filmmaker who is also an advisor of the TV channel. “We want to be a mirror for our cultures but we are also open to other expressions, which of course includes the culture of the United States of America.”

American actor Danny Glover also defended Telesur as a way to bring Latin America together, denying claims by critics that it will be used to demonize the United States. "Certainly the television station itself is not a tool that would be used to demonize the north," said Glover, also a member of the station's advisory board. "It is a tool to be used to celebrate the extraordinary diversity of this hemisphere."

Connie Mack, a Republican representative from Florida, authored the anti-Telesur bill last week to broadcast radio and television programs at Venezuela which would counter alleged anti-Americanism. These broadcasts "will provide a consistently accurate, objective, and comprehensive source of news to Venezuela," Mack said. "Hugo Chavez is an enemy of freedom and of those who support and promote it," Mack said when the bill was passed.

“Clearly, Mrs. Mack is not aware of the current situation in Venezuela, where mass media monopolies are Chavez's most fierce opposition and the main support to his political foes”, replied Bauer who has just finished a film on 1982's Falklands War between Argentina and the United Kingdom.